Welcome to the Central Africa Browser. Please select a country from the map. 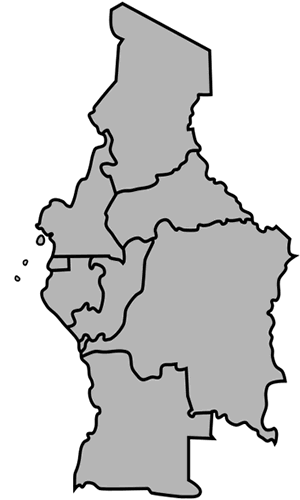 Central Africa is a conflict-stricken region where there currently are ongoing civil wars in the Democratic Republic of the Congo (DRC) and Central African Republic (CAR). The general view on women is similar throughout the region - women are inferior to men and violence against women (VAW) is common.

Domestic violence and rape are common issues in all of the countries. However, in Angola where VAW is common a law prohibiting domestic violence was passed in July 2011. Angola is further worth mentioning for their government’s decision to set up goals of reducing infant and maternal mortality by 50 percent in the following years and the DRC has passed different laws that can enhance and protect women’s rights e.g. abortion legislation. In the Republic of the Congo there are also positive notions coming from the government who is reportedly working in collaboration with NGOs to improve the status of women in the country.

The Republic of Equatorial Guinea and the Republic of the Congo are poverty stricken countries and this poverty is especially severe for the countries women. Sao Tome et Principe only ratified CEDAW in 2003, which in comparison to the rest of the region is late and all forms of violence against women is widespread in the small country.

However the general trend in the region is that traditions, customs and social norms that devalue women and detract the judicial system continue to dominate the governments’ efforts to ensure gender equality. This is for example visible regarding inheritance laws, which are regulated within the jurisdiction in most countries, but the customary law based in traditions, norms et al maintains power over the decision-making and are generally not adhering to gender equality and the rights of women.

In Cameroon and Chad female genital mutilation (FGM) is performed 20-50 percent of the female population, in Chad legislation against FGM was prohibited in 2004 but few adhere to this. Forced marriage is also a common issue in the region, this is generally regulated in law but also here customary law tends to overrule the jurisdiction and underage marriages occur. The situation in DRC is furthermore dramatic, especially in the eastern part of the country where the civil war that has raged in the country and in which rape as a weapon of war has been and still is widespread. It is claimed that 200,000 women are rape survivors.