Welcome to the East Africa Browser. Please select a country from the map: 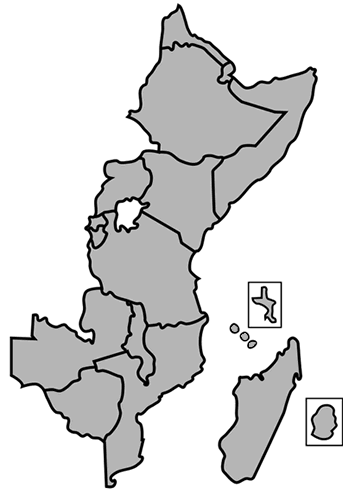 The status of women in East Africa varies from nation to nation. Inconsistency defines East African nations and their legal status in relation to gender focussed international legal frameworks.

The only East African country to not ratify the Convention on the Elimination of All Forms of Discrimination Against Women (CEDAW) is Somalia. Somalia neither has a National Action Plan (NAP) for United Nation’s Security Council Resolution 1325 (2000).

Whereas Nations such as Ethiopia and Eritrea have both ratified CEDAW, yet have not developed national Action Plans for UN SCR 1325 (2000).

Regional legal instruments, such as the Protocol to the African Charter on Human and Peoples’ Rights on the Rights of Women (2005)- aka the Maputo Protocol, has had a better response from East African Nations. Nations having ratified the Maputo protocol include Malawi; Mozambique, Comoros, Seychelles, Tanzania, Zambia, Zimbabwe, Kenya and Rwanda. Many East African Nations have signed the protocol. Eritrea is the only nation in the Eastern region to neither sign nor ratify the Maputo Protocol.

Much like the whole of the African continent, the East African Region is on a mission to tackle the Millennium Development Goals (MDG’s). Extreme poverty and hunger; low levels of females in receipt of primary education, gender equality and empowerment of women, high rates of infant mortality and maternal mortality, the prevalence of HIV/AIDS, Malaria and other diseases are pertinent issues to females in the region.

Nevertheless, according to the Fifteen-Year Review of the Implementation of the Beijing Platform for Action in Africa (BPfA) +15, the following positive developments have occurred: