Welcome to the West Africa Browser. Please select a country from the map below: 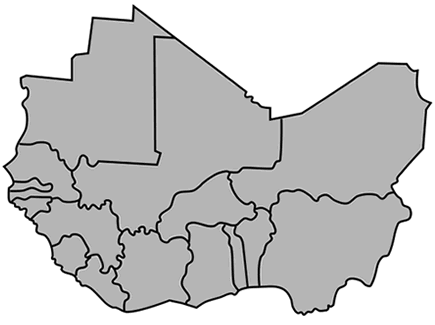 "States Parties shall combat all forms of discrimination against women through appropriate legislative, institutional and other measures"..... (Maputo protocole)

In most West African countries, the constitution prohibits discrimination on the ground of gender, however, customary and religious laws still continue to restrict women’s rights in the region.  Some West Africa Government have adopted policies that encourage the full participation of women in the social and economic life of their countries, nevertheless, the majority of women in West Africa remain confined to traditional roles, specially in the rural areas.

The combination of the legal system, customary laws and religious laws makes it very difficult to enforce the law in favour of women and girls.

In West Africa, the issue of women is one of the most difficult one to deal with because of the overlaps between the legal system and the customary law. Women and girls rights are a burning issue in the face of the many abuses women go through in West Africa, such as wife inheritance, Domestic violence, early marriage, Female genital mutilation.  There is a wide gap between the situation of women in urban areas, where the Law is generally respected, and those in rural areas still dominated by tradition where women issues are dealt under customary Laws.

Early marriage is widespread across West Africa, marriage often occurs under the age of 18years-old which is mostly common in rural areas. In Senegal the minimum age for marriage is 16 years for women and 19 for men. In 2004, the United Nations report estimated that 29 percent of girls between 15 and 19 years were married, divorced or widowed in Senegal. The custom of early marriage of women compare to men, means that less girls are likely to attend  school than boys. Consequently, men are better equipped to take advantage of whatever legal system that exists.

Polygamy is widely spread across West Africa where, a man’s wealth is determine by the number of wife and children he has. In some countries such as Guinea and Cote d’Ivoire, polygamy is considered as illegal by the law, however, it is still widely practiced. In Cote d’Ivoire, for instance, polygamy is punishable by a fine of CFA 50 000 to CFA 500 000 (USD80 to USD800) or by six months to three years imprisonment.

Due to the ongoing conflicts in the West African region, Violence against women such as rape and sexual slavery is widespread throughout the region. During the conflicts in Sierra Leone, Liberia and Cote d’Ivoire, women and girls were kidnapped and subjected to rape, mutilation, sexual slavery and they appear to have been the most affected victims. In Sierra Lone and Liberia civil war, rape was used as war weapon. It is estimated that up to 64.000 women were raped in Sierra Leone civil war.

Female Genital mutilation is widely practiced across West Africa. It is estimated that about half of Liberia’s female population has undergone Female genital mutilation and there is no Law that prohibits the practice. While some West Africa countries have publicly condemns published policy opposing Female Genital Mutilation, so far, only Ghana has passed a specific FMG law.

So far, only 10 out of 15 countries in West Africa have ratified the Maputo protocol.