NIGER: Niger is Worst Country to Be a Mother, Says Report

Source: The Guardian
Niger is the worst country on earth in which to be a mother, according to a report by Save the Children. The charity's annual Mothers' Index uses statistics covering female and child health and nutrition, as well as prospects for women's education, economic prosperity and political participation in its assessment of 165 countries.

Niger's current food crisis bears much of the blame for its placing at the bottom of the list, just above Afghanistan, Yemen, Guinea-Bissau and Mali. The report also found high levels of maternal mortality, lack of access to contraception and poor levels of income relative to men's.

Afghanistan, which came last the previous two years, was credited for providing skilled assistance at more births and a reduction in female mortality rates, among other factors.

Hunger and deprivation are the chief factors keeping other developing nations, such as Eritrea, Chad, Sudan and South Sudan, near the bottom of the list. Of 73 developing nations on the table, which account for 95% of child deaths, the Save the Children report rates only four as "very good" for child nutrition. Of the bottom 10 nations, four have seen an increase in stunted growth in children caused by poor nutrition over the past 20 years.

The authors stress that income is not the only thing that matters: Vietnam's per capita income is 25% less than that of India, yet it has half the rates of stunting.

Norway is rated as the world's best place to be a mother, followed by Iceland, Sweden, New Zealand and Denmark. The UK is joint 10th with the Netherlands, three places up from 2011. The US is rated 25th, with the report pointing to maternal death rates 15 times higher than those in Greece and infant mortality four times greater than in Iceland. The US also scores the worst among developed nations for encouraging breastfeeding.

The report "shows clearly that this crisis of chronic malnutrition has devastating effects on both mothers and their children", said Brendan Cox, Save the Children's director of policy. He said: "We urgently need global leadership on malnutrition that results in key nutrition projects being rolled out for mothers and babies to ensure their health and survival."

Save the Children has highlighted the vast differences between women's experience in Niger and the UK, with those in the former expecting only four years of formal tuition and having a one in 16 chance of dying from a pregnancy-related cause, against almost one in 5,000 in the UK.

Childhood malnutrition is a vicious circle, the report notes, with women stunted from early deprivation going on to produce underweight babies who have not been adequately nourished in the womb, an effect magnified all the more if the mother remains poorly fed or overworked. The charity wants countries to break this pattern by focusing efforts on a child's first 1,000 days, starting from the beginning of pregnancy.

Save the Children argues that even supporting mothers to breastfeed could save a million children's lives a year. 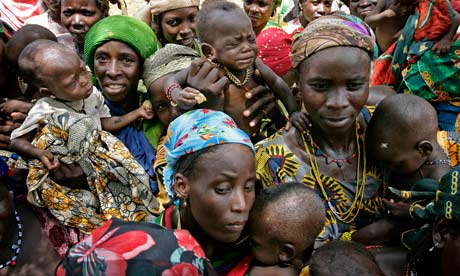 Mothers in Yama, Niger, crowd with their children to be admitted to the MSF screening field centre for malnourished children. Photograph: Dan Chung for the Guardian