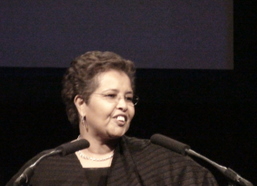 Faiza Jama Mohamed holds a Masters in Business Administration from the California State University at Fresno. She also acquired a human rights diploma in 1998 from the Institute of Social Studies (ISS) at The Hague, The Netherlands, and has over 20 years of experience working with international organizations. She has been Equality Now’s Nairobi Office Director since 2000. Prior to that she was an active member of the women’s movement in Somalia for many years and was instrumental in the coalition building of women’s organizations with a focus on promoting peace, gender equality and advocacy for women’s rights. In 1998, she received the Hundred Heroines ward for recognition of her activism in support of the human rights of women in Somalia. In 2008, she was awarded the Africa prize of the Hunger Project (http://www.thp.org/learn_more/speeches_reports/speeches/faiza_jama_mohamed_africa_prize_2008). She currently serves as a member of the African Union Women’s Committee, which advises the Chairperson of the Commission on women’s rights issues and is a member of the African Women’s Rights Observatory (ARWO) panel, which was launched in April 2007 by the Africa Center for Gender and Social Development of the United Nations Economic Commission for Africa (UNECA). She also serves in the Oxfam International Pan Africa Advisory Group since January 2010 and is a Board member of the East and Horn of Africa Human Rights Defenders Network which she joined in 2010.

The African Women’s Decade is a testimony to the African Union’s (AU) commitment to African women’s rights realization and advancement. Those who have been following the AU’s work would know that in 2003 the Heads of State and Government adopted an important Protocol on the Rights of Women and a Solemn Declaration on Gender Equality in Africa in 2004 in which they committed to implementation of the Protocol’s provisions amongst other critical areas to ensure that women are enjoying the various rights provided for therein. Unfortunately most countries have been slow in honoring their commitments and the African Women’s Decade is therefore a great opportunity to keep them focused on the work that needs to be done in terms of enabling gender equality and most of all so that women enjoy exercising their rights. It also gives us, i.e. human rights activists, the opportunity to step up our advocacy and holding governments accountable to delivering on their commitments to women.

Well, the expectation is that African governments will demonstrate concrete actions that bring about positive changes in the lives of many women and girls in Africa during 2010-2020. The Decade focuses on one theme each year and countries are expected to heighten their efforts under the theme of the year with a view to addressing obstacles and investing resources in removing such identified obstacles paving the way for workable projects that empower women to enjoy their rights. The question is whether governments will show political action to deliver on their commitments. Several countries have nationally launched the Decade thereby taking the initial step towards the objectives of the decade. Also, the decade has kicked off in an era of world economic crisis; and political crisis in several countries that led to conflict and civil war as is the case in Libya, which is one of the AU’s major contributors, etc. Hence all these represent a challenge as stability and resources availability are critical factors in implementing national programs geared at realizing the AWD’s objectives.

Removal of discrimination, both in law and in practice, as this greatly hinders women’s economic, social and political rights. Inheriting land and properties from their husbands which many are often denied by in-laws; maternal health problems and death is a critical issue for many countries though improvements have been observed in some countries; overall working women have lower earnings; sexual violence against girls in schools and early marriages is a major setback to many girls whose aspirations for personal development are cut short; and trafficking and prostituting vulnerable women is also another violation that is most neglected. The Protocol on the Rights of Women has provided a legal framework to address all these issues. Countries that have ratified it need to initiate review of national laws to bring them into compliance with the Protocol and under Article 26(2) of the Protocol they have committed to providing “…budgetary and other resources for the full and effective implementation of the rights…” recognized therein. The gender machineries are least resources in all countries and yet there is high expectation by governments of them to address the various challenges facing women. In efforts to support member states realize their commitments under the Protocol, SOAWR partnered with the AUC and UN Women to introduce to them a multi-sectoral framework that could serve as an effective tool in implementing their obligations under the Protocol. It is our hope that many of them will choose to pilot it which will then allow us all to learn from their experiences.

Yes, 31 countries have ratified the Protocol, the latest country being Equatorial Guinea, and securing this number was a huge effort made by civil society organizations chief among them being the Solidarity for African Women’s Rights (SOAWR) coalition which Equality Now serves as the Secretariat. Experience shows that women’s rights do not unfortunately usually get priority without pressure and accountability questions and advocacy directed at member states. Hence, the concerted and persistent efforts by civil society organizations are gradually paying off in favor of African women and girls’ rights. In our experience, we have tried different strategies to influence governments. We have done score cards rating red those that have not signed the Protocol, yellow to those that have signed but not ratified it and green to honor those that ratified it; and this strategy paid off leading to speedy ratification of the first 15 countries. This was a critical number to enable the Protocol enter into force in a record time. Hence it is now binding 31 countries to honor the rights provided for. We also used important moments such as AU summits, launching of the African Women’s decade in Kenya, the AU treaties week, the Beijing +15 reviews, etc. to intensify pressure on member states to ratify and we continued to get more countries. We now have 22 countries (and probably 23 countries after South Sudan becomes independent and joins the AU) to bring on board. SOAWR members meet annually to reflect on successes and challenges and we will be considering other innovative ways to apply pressure on these remaining countries.

The overall picture remains gloomy for most women especially in rural areas and urban slums. Notable areas of improvement include women’s participation in decision-making where most countries seem to have made progress at various degrees though many are far from reaching the Beijing Platform for Action targets (set in 1995). Also, we have more countries that outlawed harmful practices like female genital mutilation though much more work needs to be done in ending the practice. Nevertheless, national demographic health surveys show that the practice is on a downward trend thanks to much effort by the civil society organizations. Several countries have introduced laws to curb domestic violence and others are in the process of doing so. The fact remains that small steps will only lead to small gains and countries need to step up their investments in ensuring that the overall situation improves for women in real terms and in a big way.

Political commitment is key to ensuring women enjoy their rights. Governments need to back up their commitments with actions. For example; outlawing female genital mutilation is not enough. They need to take additional steps as obliged under article 5 of the African Women’s Rights Protocol. This means investing in public education; taking legal action against perpetrators, supporting victims and so on. Likewise, they need to take serious action against traffickers and pimps who profit from selling women’s bodies. They also need to take action to eliminate de facto and de jure discrimination which impedes women’s advancement and ability to enjoy their human rights. Hence, good policies and laws that protect the human rights of women backed with governmental action programs and resources would be critical. Civil society organizations are doing a lot of good work but I always believe that governments need to take charge and show leadership in promoting the rights of women. This is the big challenge that is present in most countries.

This is a very important question. Young women need to be actively recruited into the movement or else it will vanish and this would be a big setback. This reality is not lost to many women and efforts have been made in different countries and at regional level to engage young women in various projects and programs. Young women leadership institutes and training are ongoing in several countries and notably run by organizations like Girl Power Initiative (Nigeria) and Akina Mama wa Africa (Uganda), and others are led by young women themselves such as the Kenyan Young Women Leadership Institute and mixed organizations such as the National Union of Eritrean Youth and Students (NUEYS). We need to encourage more of such noble initiatives and to bring the voice of the youth to the fore. As you know the recent AU summit that held in Malabo, Equatorial Guinea, focused on ‘Youth empowerment for sustainable development’ and the SOAWR coalition which campaigns for the popularization and implementation of the African Protocol on the Rights of Women organized an essay competition for youth to express their views on what values the Protocol holds for them. Interestingly both young women and men responded to the call and made their views known to thousands of readers of through the award winning online newsletter “Pambazuka”1 So, it is important to build their capacities but also to give them the space to share their views on important issues being discussed at continental level and then give their voices greater visibility.

Please click the month below to read our last months interview:
March
April
May
June