Our Interview of the Month with Margot Wallström

Margot Wallström became the first-ever Special Representative of the Secretary-General on Sexual Violence in Conflict on 2 February 2010. Ms. Wallström has been a long-time advocate of the rights and needs of women throughout her political career -- first as Swedish Minister and later as Environment Commissioner and Vice-President of the European Commission. Her mandate is global and multifaceted, focused overall on leading and coordinating efforts to end conflict-related sexual violence against women and children. Previous landmarks in her career include ministerial appointments in Sweden, senior positions in the non-governmental sector and the European Commission. Throughout all her work, she has been a consistent and vocal advocate for the rights of women. 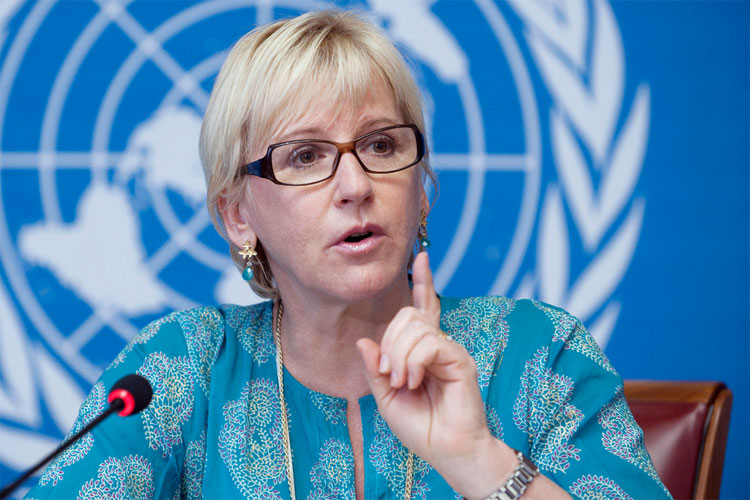 Ms. Wallström has had a long career in politics, which began when she served as a Member of the Swedish Parliament from 1979 until 1985.  Her ministerial career began in 1988 when she was appointed Minister of Civil Affairs, responsible for consumer, women and youth matters.  She subsequently assumed the position of Minister of Culture, and then Minister of Social Affairs.  In 1998, she retired from Swedish politics to become Executive Vice-President of Worldview Global Media, a non-governmental organization based in Colombo, Sri Lanka.  In 2004, when the Barroso Commission took office, she was appointed first Vice-President responsible for Inter-Institutional Relations and Communication.

She has received several honorary doctorates and awards for her work on sustainable development and climate change, and has also done extensive work to endorse a European Union-Africa partnership on renewable energy, and to champion equal opportunities.  She was also co-founder of the European Union inter-institutional group of women and a key supporter of the 50-50 Campaign for Democracy by the European Women’s Lobby, where she worked to promote a more gender-balanced European Union.

Q1: In February 2010, you became the first-ever Special Representative of the Secretary-General on Sexual Violence in Conflict. After two years into your mandate, what do you see as the greatest challenges in addressing sexual violence in conflicts?

A1: It is crucial to keep the issue of conflict-related sexual violence on the agenda of the UN Security Council and remind them and other actors that this is not only a women's issue, but also a peace and security issue.

I believe that the five-point agenda established early on during my mandate is still valid, with the fight against impunity the number one priority. For too long, women survivors of sexual violence have walked in shame while perpetrators have walked free. Prosecution is also prevention, because fighting impunity sends a strong signal to potential perpetrators that sexual violence in conflict is a crime that carries consequences.

Q2: The UNSCR 1820 was adopted in 2008 as a follow up to UNSCR 1325 on women, peace and security to address the issue of rape in war, do you think its implementation has led to actual change on the ground?

A2: All UN Security Council resolutions on Peace, Women and Security constitute important steps and tools in the fight against conflict-related sexual violence. I believe we now have the instruments we need on an international level, but at the end of the day what really counts is the situation and realities for the people on the ground.

I think we have seen progress, but it has only started and change is very slow. What gives me the biggest hope is the increasing attention paid to prosecutions and the fight against impunity for this type of crimes.

Q3: In DRC, the "rape capital of the world" (as you qualify it yourself), sexual violence by government forces and armed rebels is being used as a cheap, effective tactic to terrorize communities trapped between armed groups. Why are we not moving forward in addressing sexual violence in the DRC?

A3: I think we _are_ moving forward in addressing sexual violence in the DRC, not the least through the use of military and mobile courts, including prosecutions of high military commanders of the FARDC (the national army). But much more still needs to be done, both by the Government on different levels, and by international actors.

The new Government of the DRC has a fantastic chance to create a different narrative for the country and move away from the image its rapists have given it, for example by prioritizing the fight against impunity and allocating the necessary resources. International donors, on the other hand, need to coordinate their activities better and put more pressure on the Government when it comes to security sector reform. National army soldiers must receive training on how to prevent sexual violence, but they must also be vetted, as well as housed and paid properly.

A4: Most if not all UN Security Council mandates pertaining to the protection of civilians include a reference to the prevention of gender based and sexual violence. As such, UN peacekeepers have a very important role to live up to their mandate, also in terms of these aspects. It is important to remember, however, that ultimately the protection of citizens is up to the Government of each country and UN peacekeepers cannot be everywhere.

Q5: Since its adoption in October 2000, so much has been said about Resolution 1325 but there is still much to be done.  How do you think the UN and the International community can push for the full implementation of UNSCR 1325? Also, could you tell us why it is important to have more women peacekeepers?

A5: I am still waiting for all signatories to adopt a National Action Plan on UN Security Council resolution 1325; this is the bare minimum.

Women peacekeepers are important for at least two major reasons: First of all, women survivors and victims of conflict-related sexual violence are more likely to approach and share their stories with women peacekeepers than with 'another man in uniform', as they are likely to see it. Secondly, they can serve as role models for girls and young women, which we have seen already in Liberia where a group of women peacekeepers have been deployed.

Q6: From Kosovo to the Democratic Republic of Congo and the Darfur region of Sudan, rape and sexual abuse of women and girls are commonplace. Rape often happens because most people know that they can get away with it, what can be done to end this impunity?

A6: This has unfortunately been the case for too long and must change and that is exactly why I have made the fight against impunity my overriding priority. We see that the International Criminal Court (ICC) has started to regularly include charges of alleged crimes of sexual violence in their indictments against political and military leaders, which sends a very important signal. At the end of the day, acts of sexual violence must not lead to the corridors of power but to the prisons of a cell.

Q7: In September 2009, more than 150 people were killed, thousands wounded and hundreds of women suffered brutal sexual violence in Guinea. Almost three years after, there is still no justice for the victims of the stadium massacre. Why do you think it is taking so long?

A7: Regardless of why, it is completely unacceptable that it has taken so long. That is also why I decided to visit Guinea last November. Having met with the Minister of Justice among other Government representatives during my official visit, I was happy that we were able to agree on a joint communique between the United Nations and the Government of Guinea. My office has also offered the Government the assistance of our Team of Experts on the Rule of Law. We now expect swift follow-up and that the remaining perpetrators are brought to justice.

Q8: What are some concrete steps that governments, NGOs, and international organizations working in conflict and post-conflict zones can take to protect women and girls from sexual violence?

A8: This depends on the country or specific context. But generally speaking, Governments and Members of Parliament have a responsibility to ensure that the necessary legislation and norms are in place, and to allocate the resources needed to turn words into deeds. It can also be about having a zero tolerance policy of sexual violence in place for the national army and police force, for example. Donor countries can put more pressure and attach conditions to their development aid to recipient countries. NGOs and international organizations, as well as individuals, can ask their politicians and other decision makers what they are doing to fight the scourge of sexual violence.

An additional suggestion is to ask importers and manufacturers of electronic products about their mineral sources, in order to try to avoid or minimize the demand for so-called conflict minerals, which help fuel and finance the conflict in eastern Congo.

Q9: In the last decade, reports have surfaced of the blue helmets trusted to protect populations, are instead raping local women and abusing children. To date, not a single peacekeeper has ever been on trial just because the UN can't afford to upset the peacekeeping-contributing nations. Could do you comment on this?

A9: First of all, a single case of misconduct or abuse by UN peacekeepers is detrimental to the credibility of the United Nations and is completely unacceptable.

Secondly, it is important to keep in mind that the UN has a very strong policy of zero tolerance of misconduct and abuse, which must be strictly enforced. What has to happen in case of a peacekeeper misconducting or abusing the local population is that the individual peacekeeper is sent home. We in the UN have to ensure that the country contributing with peacekeepers guarantees appropriate legal follow-up.

Q10: After a little over two years in office, what do you think could be the next steps necessary to improve the situation of women in conflict? Are you optimistic or pessimistic about the future of UNSCR 1325/1820?

A10: I leave my position with a heavier heart, having seen and heard so many horrible stories of conflict-related sexual violence over the last two years. But I am also carefully optimistic, both because of the fact that this issue is now firmly placed on the agenda of the UN Security Council, and because of all the amazing, strong women I have met during my time as UN Special Representative. That gives me hope.

I am careful not to tell my successor what to do, but I think a continued focus on the fight against impunity is important. Then there are a number of things I believe need additional attention, such as for example addressing the problems children born out of rape face. There is certainly no shortage of challenges linked to this issue.