Our Interview of the Month with Elizabeth Bintliff

Elizabeth Bintliff is the Vice President of AfricaPrograms at Heifer Project International, where she has worked since 2000. From her base in Little Rock, Arkansas she leads Heifer’s program in Africa, managing a portfolio in 12 countries.

Born and raised in Cameroon, Elizabeth earned a Bachelor’s Degree in International Affairs from Kennesaw State University in Georgia, and has a Masters in African Studies from Yale University. She was a Fulbright Scholar in Zanzibar and has worked South Africa, Kenya and Tanzania. She started her career at the Carter Presidential Center in Atlanta, GA. She is fluent in English, French, Swahili and West African Krio.

Elizabeth is committed to development, especially for women in Africa, where she believes that giving three things – a choice, a voice and an opportunity- is key to changing the trajectory of development on the continent. Her commitment to fighting poverty and elevating the role of women is testament not just in her work abroad, but also in the US where she serves on the Board of Directors of the Arkansas Foodbank and the Women’s Foundation of Arkansas, which promotes women in philanthropy and the empowerment of young girls.

Elizabeth holds a Master’s Certificate in Non-Profit Management from the University of Arkansas at Little Rock and is a graduate of Leadership Arkansas; a program of the Arkansas Chamber of Commerce.

She has represented Heifer International on several local and national media appearances including ABC’s World News Tonight in 2008 and The Colbert Report in 2009. In 2010 she was selected as “40 Under 40” by the Arkansas Business Chronicle. Elizabeth is an honoree of the “Crowning Achievers’ award by the NW Arkansas Chapter of Alpha Kappa Alpha. She is also a member of the Arkansas Women’s Leadership Forum, a network of female executives.

Elizabeth is married to Jason Bintliff and is the mother of two girls: Indira and Abira.

What are the most pressing issues for women in Africa? And what are the primary actions to take in response to those issues?

Fundamentally there are three things that inhibit women everywhere in the world - lack of their voice to be heard and influence, a choice and opportunities. In addition to my role at Heifer International I serve on the Board of Directors of the Women’s Foundation of Arkansas and we talk about the same things affecting women in Arkansas as we discuss in myday job at Heifer. For women in Africa what is even more dangerous is that other people are speaking on their behalf. The word empowerment is used very often to articulate what women need,but my assessment is that everyone is born with some power and it is taken from them because of societal norm, experiences, family or social circumstances, laws and government policies. Perhaps what we need to discuss is ‘re-powerment’; how to enable women to re-gain the voices, choices and opportunities that are human rights with which they are born.

Of all the agents of change that empower women – education is the most important. It is a game-changer, an equalizer. In my own experience, I was born in Cameroon. Both of my grandmothers were illiterate, my maternal grandmother was one of two wives but even she insisted that my mother be educated and as a result of that,I was educated. Here, I’m talking not just a formal education but about having a forum for learning, for ‘re-powerment’ and finding the voice to tell the world,as a woman,what you know, what you have to offer, as well as, what is your due.

The movement on gender equality and women's empowerment have been on the upward trend in Africa in recent times, what is Heifer International’s contribution to the trend?

One of our twelve cornerstones at Heifer International is ‘Gender and Family Focus.’It is foundational to our organizational DNA. In our theory of change, women are a critical agent for change as custodians of culture and wards of community cohesion. We build all of our work on the belief that in order for communities to change we have to repair the fragmentation that exists among them and build on the social capital that communities have, with women being a big part of that equation. We need look no further than women like Nobel laureates, Leymah Gbowee and Wangaari Mathaithat demonstrate the importance of a strong female perspective. Women are half of the gender equation. No society can truly flourish if it stifles the dreams and productivity of half its population. Governments, communities, companies and other agents within Africa are recognizing that. Over the last few years the elections of President Ellen Johnson Sirleaf of Liberia and President Joyce Banda of Malawiare moving the needle in terms of seeing the potential in women but there is still work to be done. And for every African woman that gains international recognition there are millions more working in the shadows.

In October, I was traveling with the Minister of Gender and Women’saffairs in Zambia and we visited Heifer projects where families are benefiting from our support. It was an incredible testament of the power of women to self-mobilize and influence the positive growth trajectory of their communities.

What do you consider as the gains made and the gaps that need to be addressed to improve the lives of women in Africa?

The biggest gains have been around African men’s acceptance and in some cases embracing a different value for African women. It is often not recognized that in the gender relations equation the male perception and action is also critical component. At Heifer International we approach it from the perspective of gender and family, looking at a whole entity and moving towards a balance. We can see at a macro level women are stepping more into leadership positions at government, civil and corporate levels. But the real change is happening within the homes, inside the villages and small communities. From the perspective of the millennium development goals, the condition for young girls accessing education and healthcare has greatly improved. The long term impact is around the positive changes happening in the lives of young girls because they are the next generation.

A gap still exists in the act of paying it forward especially women mentoring youth, not just by speaking to them. For example, African women who succeedasentrepreneurs, event planners, farmers, doctors, florists, hairdressers, policy makers have a responsibility to go back to local high schools and invest theirtime and talent in building that community by inspiring and guiding students, reconnecting with the teaching staff and investing in infrastructure. I refer here to the Akan philosophy of ‘sankofa’ – go back. In doing so, we become role models young girls can relate with, draw inspiration from and have access to.

What is the role of the African woman in the diaspora towards the autonomy of women in Africa? Is it being felt?

The biggest responsibility for women in the diaspora is to not lose touch with the reality of many women in Africa; to always remember that we are the exception in some ways and that second to women in Africa speaking on their own behalf we are the next legitimate voice. We have a louder platform and sometimes a wider audience. We have a great responsibility to present our perspective to the world with accuracy and authenticity. It’s just not about helping give other women a louder voice, it is about providing them opportunities, being engaged and having access to a larger global community – through entrepreneurship, scholarships, investment. I feel very strongly, that as an African woman in America, I can represent the perspectives of other African women in ways that cannot and should not be represented by someone of a different demographic.

Access to justice, ignorance of the law and economic empowerment remains a mirage for many women in Africa. What can be done to remedy the situation?

Speaking specifically to economic empowerment, my experience at Heifer International has been that access is in fact a problem. When it comes to utilization of opportunity, women have proven to be innovative in ways that exceeded my imagination. I see it everyday in my work. I spend a large amount of my time in rural communities all over the continent visiting with women who live there.

I think back to a project I visited in Burkina Faso some years ago; a group of rural women, all illiterate, had decided to start a project together and pooled their resources to ask for Heifer’s assistance. They received some chickens and started selling eggs. With the revenue from the sale of eggs they started buying grain to plant, and as their harvest increased they bought a feed mill to process the grain. One of the first things they invested in when they starting getting profits was their literacy…and the education of their children. Together they took loans, made larger investments. They were able to do together what they could not have done individually.

We know that private sector investment is eclipsing donor funding for many African economies but those investments are only reaching a small minority and there is still work to be done to create channels, mechanisms and avenues for women to gain greater access because we are still disadvantaged by the virtues of our gender, lower comparative education levels, civil and customary laws etc.

Women’s networks prove very successful on their own but here we have a shared responsibility with the other gender to more proactively engage in creating opportunities for wider impact.

What can men do to work towards gender equality?

Fundamentally it needs to start from childhood and our youth. We still see a lot of communities and families where the preference, especially for education, is given to boys over girls even though there is evidence that girls are equally capable of maximizing the value of an education. What we can be hopeful about is there is a shift happening with younger generations and that the perceptions around women and girls are changing in the modern age. Even though boys are more likely to be given an education than girls, there is an increase to the number of girls being educated.

There is still a tremendous amount of work to be done, the majority of the power influencing decision making is still in the hands of men, from households to government. The challenge is not to wrestle it away but to create more equity; give women the voices, the choices and the opportunities to participate. 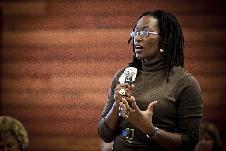