LIBYA: A Year on, Libyans Enjoy Freedoms But Anxieties Abound

Source: Reuters
Libyan jewellery shopkeeper Hassan El-Kekli used to be careful what he said on the phone to his family and friends.
Any criticism of Muammar Gaddafi's regime was off-limits for fear security officials listening in could show up at his home and arrest him.

"Before we couldn't say anything, we were frightened," the 35-year-old said. "Now I can talk about anything.A year after the uprising that toppled Gaddafi began, Libyans are rejoicing in their newfound freedom after more than 40 years of autocratic rule.
Protesters regularly take to the streets to voice their anger on a wide range of issues, from calling for payment for overdue wages to the removal of state-owned company managers to championing women's rights. The change is dramatic. Under Gaddafi's police state, tones were hushed, even at home.

"It's just like Speakers' Corner in London now. People finally can speak out," said a 62-year-old Tripoli street vendor called Ibrahim, before adding: "But is anybody listening?"

While the taste of freedom is sweet, the new era in the North African country has gotten off to a shaky start.

Life for ordinary people has improved since the eight-month NATO-backed campaign against Gaddafi and the subsequent months of chaos, but security and political woes abound in the run-up to the country's first free elections in June.

As it tries to build a democratic state, the ruling National Transitional Council NTC.L is struggling to impose its authority on a country awash with weapons and to form a functioning national police force and army.

Heavily-armed militias have stepped into the vacuum, carving the country into local fiefdoms. Their fighters say they are loyal to the NTC but answer only to their own commanders. They often clash because of disputes over who controls which neighbourhoods.

The easy access to a mass of weapons left over from the war is a major cause for concern as Libyan try to return to normal life. Residents in Tripoli cite carjackings and robberies as well as several small disputes which have turned into full-blown gunfights in recent weeks.

"I am scared to go out late at night," said Tripoli resident Muneer Younes, 32, who works in shipping. "There are so many gunmen in the streets."

In a recent example of the volatility even in the capital, rival militias fought a two-hour gunbattle earlier this month over a luxury beach house being used as a barracks.

In the chaos of the battle, men could be seen running along the beach carrying crates of ammunition taken from the house.

"TELL THEM NOT TO HARASS ME"

Libya's wartime rebel prime minister Mahmoud Jibril has warned that Libya faces a "power vacuum" that could be exploited by foreign powers, with or without the help of groups inside the country.

"My own interpretation of the situation was we need an effort to unite people."

Libyan women complain of regular harassment and say one issue in the new Libya, where Islamists have more freedom to express their views, is that those who choose not to wear the Islamic headscarf now find themselves criticised by strangers.

"Women are stopped and asked why they are not wearing the hijab," said 25-year-old student Majdulin Abida, who organised a small march for women's rights. "We find ourselves unprotected."

During the march to the prime minister's office, young women carried banners reading: "Don't tell me what to wear, tell them not to harass me."

Private celebrations have also been cut short on security concerns. Whereas before a women-only wedding party could go on until the early hours of the morning, some guests now choose to leave early.

"I don't care what the government says, it's not safe out there at night," said one woman at a bridal party as she prepared to leave before midnight.

Basic food prices, inflated during the conflict, have come down but still remain high. The government is subsidising many food products as well as fuel, but with a shortage of cash during and after the war and low salaries, many are struggling.

"Prices have risen in general and people are complaining," retired businessman Mustafa Almogariaf said. "Getting money from the bank is not systematic. I've had a cheque in my pocket for a week, but I still can't get the money."

NTC Chairman Mustafa Abdul Jalil told Reuters the government plans to increase salaries and pay former fighters who demand compensation. But plans to disarm fighters have not gone as expected, with only 10 percent integrated in to the police and army so far, he said.

"Despite the proliferation of weapons in the country to the point of reaching the hands of the youth and other irresponsible people ... only limited incidents have occurred and things are still under control," he said.

According to a survey by pollsters ORB International published this month, four out of five Libyans agreed conditions in the country were heading in the right direction.

The poll, which surveyed 1,249 people in Tripoli, Benghazi and Misrata late last year, said 68 percent considered the NTC effective in helping to improve life in Libya.

Their most urgent priorities were improving income and living standards and reducing poverty, as well as improving security and disarming former fighters.

In the eastern city of Benghazi, the birthplace of Libya's revolution, a growing sense of frustration has been simmering since October when the NTC moved to Tripoli after declaring Libya liberated from Gaddafi's rule.

Residents say they feel forgotten, and frustration boiled over last month when a crowd demanding the government's resignation smashed windows and forced their way into the NTC's Benghazi offices. Abdul Jalil was trapped for several hours.

Benghazi suffered four decades of neglect at the hands of Gaddafi as he fashioned Tripoli into his power base at Benghazi's expense, residents say, but their hopes for the city regaining its rightful place are not materialising as they point to crumbled buildings and rubbish-strewn streets.

"Benghazi and the eastern part of Libya are more neglected now than before. Benghazi has been abandoned by the NTC," resident Ibrahim Mohammed Jibril said.

A range of celebrations are planned in Benghazi for February 17, the revolution's anniversary, including a concert. Many are expected to come mark the occasion and hope for a better future.

"The rebels are doing their best. They stay up every night so that we can sleep comfortably," said Muhannad Ben Shatwan, 20 and currently unemployed.

"We have to improve and develop as people and as a civil society ... Everytime the NTC makes a step forward, there are protests and objections. We have to be patient. Nothing comes easily."

Some say they won't be patient for long, however.

"I am giving my country one more year. Hopefully things will change," Younes said. "If not, I will leave and never come back again." 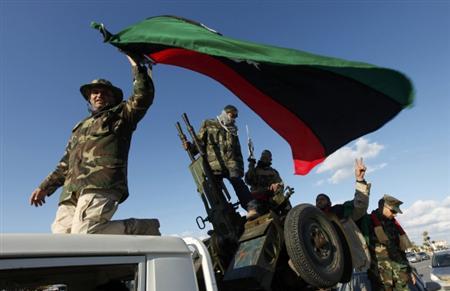