Niger has one of the highest rates of child marriage in the world, and is struggling to stop the practice, writes the BBC's Fergal Keane.

In the distance it appears like a tiny blur against the bright light of noon.

But coming closer, gathering force, the wind creates a moving cloud of sand.

By the time it reaches the Tuareg nomads in the desert north of Agadez it is whipping into faces, stinging every piece of exposed skin.

They hunker down and turn their backs to the wind and wait for the storm to pass.

Every choice in this landscape is defined by the imperative of survival.

For the Tuareg of Niger, life is a constant struggle against the accumulating challenges of hunger and poverty.

They live in a country which ranks lowest on the United Nations human development index - 187 out of 187 - and which has the world's highest birth rate.

Niger also has one of the world's highest rates of child marriage.

About 24% of girls will be married by the time they are 15. That rises to nearly 80% by the age of 18. It is a social phenomenon that affects all significant ethnic groups in Niger, including the majority Hausa community.

The main reason is economic.

Hard-pressed families receive a "bride price" in return for their daughter's hand in marriage. A girl married off is also one less mouth to feed.

And there is a deep-rooted fear of unmarried teenaged girls falling pregnant, or as one mother put it: "They can easily become delinquents."
'No room for dreams'

The story of child marriage in Niger is rooted in poverty and the overall position of women in society.

In the northern city of Agadez, we were told of marriages of Tuareg girls to wealthy men from neighbouring Nigeria where thousands of dollars were paid - the price varying according to the girl's beauty.

One mother, Amina, who asked that her full name not be used, has a 15-year-old daughter.

She is unemployed and separated from her husband, and described Niger as a place where "there is no room for women to dream dreams".

Marriage was her daughter's choice but she herself would welcome a wealthy suitor, she said.

"Many families have no choice... When a wealthy Nigerian comes offering millions [in local currency], they will let them marry, even if they are young," Amina added.

For some the consequences of such marriage can be catastrophic.

Aysha, which is not her real name, was married at 13 to a businessman from the northern Nigerian city of Kano.

"I didn't think it was about marrying someone I would be happy with," she said, "but I was very young and I didn't have anybody to whom I could go for advice."

Far from her family, Aysha found herself imprisoned in her new husband's home.

Aysha recalled that after about 10 days, he came and locked her in the bedroom.

The teenager later managed to escape with the help of her brother - and is now 21 and studying to be a nurse.
'Lack of education'

There are also significant health issues for young girls who become pregnant. 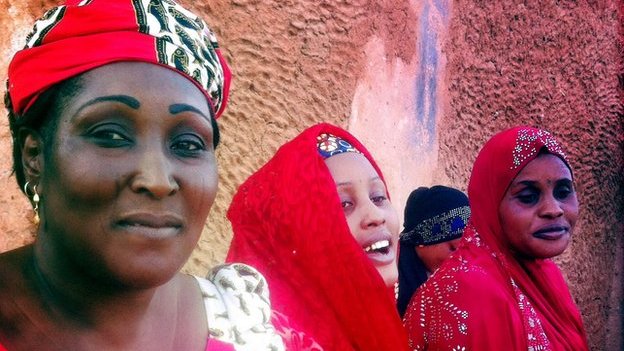 At the Dimol Clinic in Niger's capital, Niamey, there were girls who had been married as young as 12.

Dimol means "dignity" in the Hausa language and the clinic treats girls and woman for fistula - a gynaecological condition often occurring in girls giving birth before they are physically mature. It can lead to severe infection and incontinence.

The clinic director is Salamatou Traore, a straight-talking symbol of African dynamism, who blames poverty and the lack of education for much of the problem.

"Getting change is very difficult and it is very costly - it is not easy, because most of the population is illiterate," she said.

"They don't go to school and they don't allow the girls to go school. Change is difficult."

While the marriage of young girls is a social norm here, it is also given explicit backing by religious leaders.

When the government tried to introduce laws to give more protection to girls, it faced strong opposition from prominent clerics in this overwhelmingly Muslim country.

At a Koranic school in Agadez, Sheikh Abbas Yahaya told the BBC that marriage should depend on the physical maturity of the couple.

"It depends on the body of the girl and the man's body," he said.

"If the two are mature the marriage can be OK also, because in Islamic religion even at age nine years, if the girl is in the right condition she can be able to get married."

The United Nations Children's Fund (Unicef) has been campaigning for change. It carries out awareness programmes in towns and villages.

Its chief child protection officer in Niger, Brigitte Sonnois, says child marriage must be tackled on a wide front.

Creating food security for families is essential as well as education and, critically, changing the status of women in society.

"People do not really see the value of education for girls as they mostly expected to be wives and mothers and raise children," she told the BBC.

Changing such attitudes, and tackling the poverty that helps create them, is a daunting task.

To most girls living in poverty the prospect of having a choice about their lives is remote. 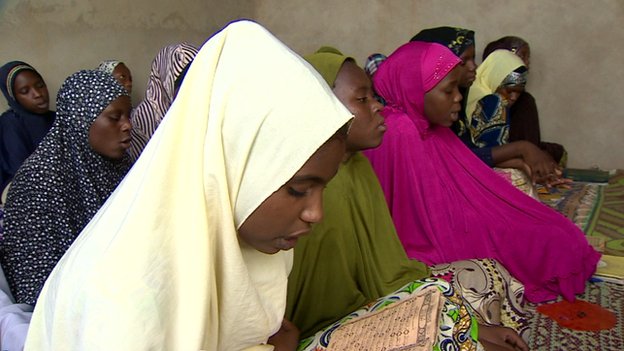