Source: Afronline
From October 27 to November 1, Algeria is hosting in Oran the first international women's conference to promote a culture of peace.

The conference has been organized at the initiative of NGO Aisa (www.aisa-net.com), which has special consultative status at the UN Economic and Social Council, and the Djanatu Al-Arif foundation (www.djanatualarif.com), which works for sustainable development.

This is the first event on such a scale in a Muslim country dedicated to women and peace. It shows that there is a remarkable will on the part of some components of society to spread ideas of openness, living together peacefully and improving people's lives. This Congress, whose focus is "Giving Voice to Women" also constitutes a gesture of recognition and solidarity by and with women, who are often the targets of violence and are suffering in many parts of the world.

"The things taking place around the world show we need to change fundamentally the way we live together," says Cheikh Khaled Bentounès, leader of the Sufi Alawiyya order that is helping organize the conference. "Sustainable change can only be brought through education and that is one of the reasons that women have such an important role to play in establishing a culture of peace. It is women that transmit values of equality, compassion and cooperation. They need to participate in the ideas debate as of now, to help build the foundations of a culture of peace."

The Algerian authorities are participating significantly in the event, in terms of security but also in the conference work and discussions.

54 speakers and 3,000 delegates are expected from all around the world. They will discuss and debate with the public around 5 themes: Sharing Perspectives, Ethics and Education, Tradition and Modernity, Wearing and Not Wearing a Veil, Women and Peace. 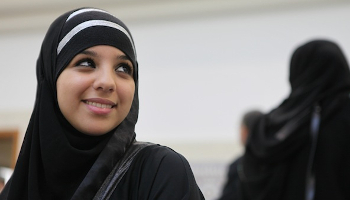 Radio Okapi will have a strong presence at this event. Fondation Hirondelle Country Representative in the Democratic Republic of Congo Patrick Busquet will address the conference on "Media and Human Values", using the experience of Radio Okapi to illustrate some of his speech on the constructive role that information and media can play. Okapi is also sending a special envoy, Lydie Betina, who will produce daily reports on this site, allowing you to follow the discussions taking place.