Murabit was referring to the two main opposing coalitions engaged in a military conflict over power in Libya – a conflict that has split the country and threatens to push it over the abyss into years of Somalia-like destruction and disintegration.

”Vilification of the opponent has made it virtually impossible to find common ground and sustainable peace. There is too much focus on the polarizing aspects’’, she explained.

Murabit objected to the classification of the Libyan conflict by most foreign observers as simply a tribal or religious battle. She explained that tribe and religion is used by both sides as an identifier or as a tool.

Murabit highlighted the continued resistance she still encounters to women’s participation in civil society and political activities in Libya.

This included opposition or resistance from those at the highest echelons in Libyan political establishment such as Libyan parliament. It has also included resistance from some young Libyan men who she had assumed would actually be supporters of women’s cause. 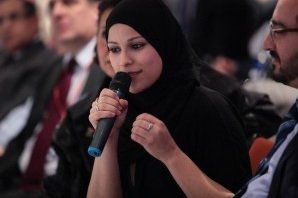 Women, she noted, have to unfortunately share all the risks of war in Libya, but enjoy none of the control exercised by men.

This was inherently wrong and so her NGO, Voices of Libyan Women launched the largest women’s campaign (Noor) to spread peace and end violence across the country – visiting 35 towns and cities.

Most of all, stressed Murabit, the campaign was carried out through Libyan women’s determination ”to wage peace against war’’.

”It does not matter whether you are a supporter of Libya Dawn or Libya Dignity – what matters is that you are a Libyan amplifying the call for unity’’.

The only way to get sustainable peace is to exchange the bomb for a pencil or a job, and not to bomb the bomber out of existence, she concluded.

Alaa Murabit is founder of Libyan women’s NGO Voice of Libyan Women and acts as advisor to numerous international security boards, think tanks, and organizations. Most recently she was nominated to the UN Security Council Resolution 1325 (women, peace and security) Global Advisory Board, the UN Women Global Advisory Board, and Harvard University’s “Everywoman, Everywhere” initiative. She was named the “International Trust Women Hero 2014″ by The New York Times and “One of 25 Women Under 25 to Watch” by Newsweek.  [/restrict]