Presidential elections were held in Burundi on 21 July 2015.

The announcement of President Pierre Nkurunziza that he is about to run for a third consecutive term in late April 2015 triggered protests and a failed coup attempt in May 2015. According to Burundi’s Constitution a president is entitled to serve only for two terms but Nkurunziza’s party claimed that he was eligible for another term because he was elected by lawmakers for his first. The presidential election took place after two postponements and the United Nation’s report mentions that while Election Day was peaceful and conducted adequately, the overall environment was not conducive for a credible electoral process. Nkurunziza won as he took 69.41% of the vote, 50 percentage points ahead of his opponent, Agathon Rwasa and he is now serving a third five-year term. In Burundi, the President is directly elected by universal suffrage with an absolute majority for five year term once renewable.

Parliamentary elections were held on 29 June 2015. The elections were initially set for 5 June 2015 but there was a delay due to unrest. The National Assembly has 100 directly-elected members, who are elected in 17 multi-member constituencies. According to the Burundian Constitution, the National Assembly members are elected by proportional representation from closed multi-ethnic party lists for each province. Τhere is a minimum quota of 2% of the votes for representation, a must have 60% of Hutu and 40% of Tutsi members, a quota of at least 30% of women and three members of Twa ethnic group are co-opted.

The involvement of women in politics is a major priority in Burundi as the country seeks to recover from years of civil war and authoritarian rule. As it was already mentioned above, in 2005, the government adopted a gender quota of 30% at the local, provincial and national levels. The greatest indicator of success of the gender quota policy in Burundi is the high rate of women’s representation in the legislature. In the 2010 elections, 31% of National Assembly members and 46% of senators were women. It has to be noted that where no quota exists, for instance in the village (colline), women’s representation is much lower (17%).

Although women have taken on roles in government, they are still encountering obstacles beyond just gender stereotypes. In particular, they are facing practical challenges such as difficulties to attain equality with their male counterparts and a lack of funds to run a campaign. The greatest challenge for them is to overcome a lack of experience in government in order to be seen as credible leaders and step into decision-making roles. As a result, despite the fact that Burundian electoral legislation can be considered as progressive in promoting women’s political participation, none of the presidential candidates was female. Currently, after the 2015 elections, the percentage of women represented in the Senate is 41.9% and 36,4% in the National Assembly.

Burundi has adopted different strategies in order to eradicate inequalities between men and women. The National Constitution acknowledges the Convention on the Elimination of All Forms of Discrimination Against Women (CEDAW) as an integral part which means that the non-compliance with the CEDAW is a violation of the National Constitution. In addition, the National Gender Policy and its action plan aim at correcting inequalities in crucial areas such as tradition, mobilisation for peace, poverty, employment, health, equal rights, violence against women and decision-making.

Burundi is one of few countries in the world to have adopted a gender quota and its aim is to promote the participation of women in the political sphere. Nonetheless, there are significant practical barriers which women have to overcome. Women’s access to political activity and leadership positions still remains restricted because of cultural prejudices, lack of experience in government and funding. 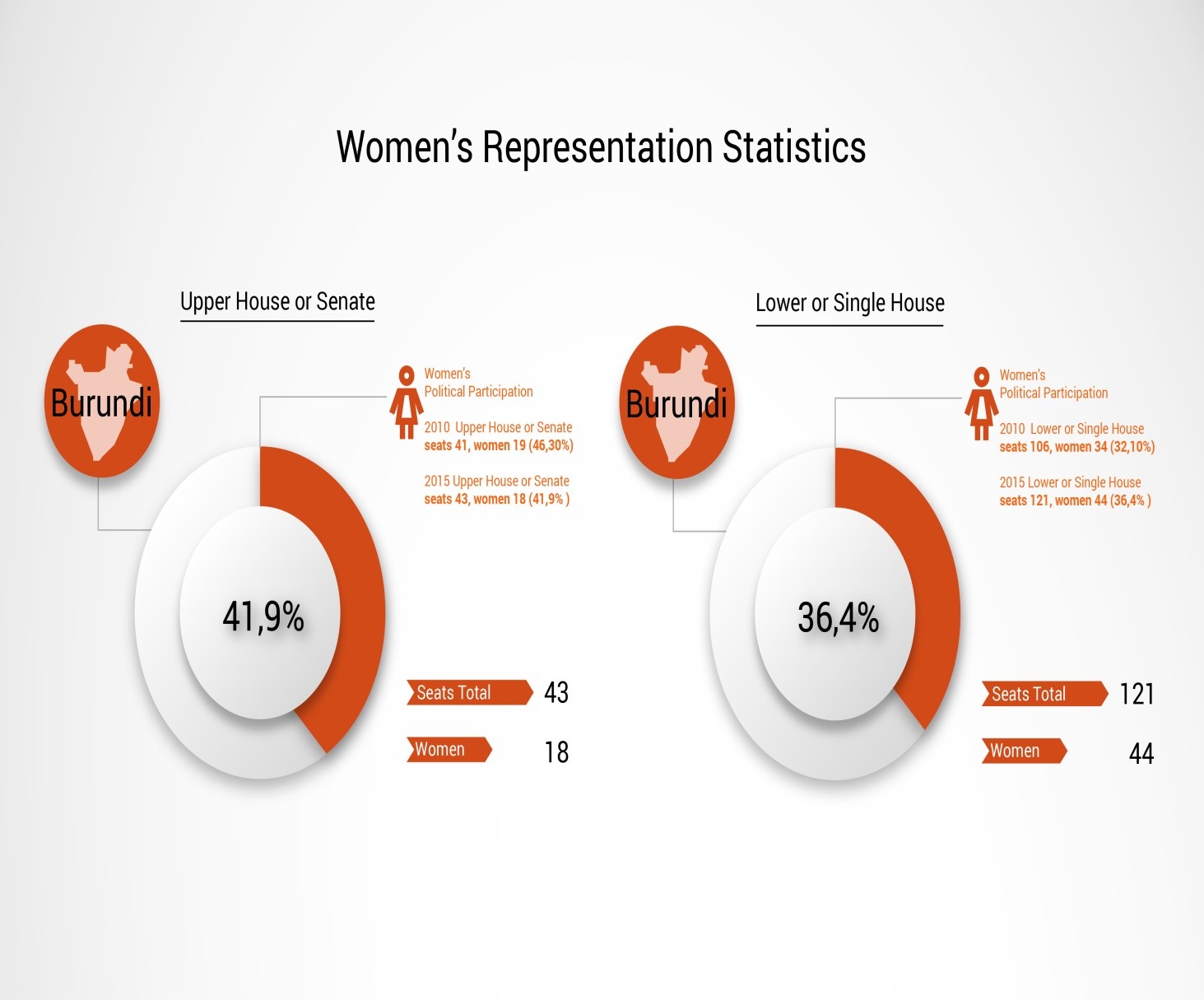