Parliamentary elections in Cape Verde were held on the 20th of March this year.

According to the Inter-Parliamentary Union, the unicameral National Assembly is the legislative body of the Republic of Cape Verde, comprising a total of 72 members. Members of the National Assembly are directly elected in multi-seat constituencies by proportional representation vote, with members serving 5-year terms. The party with the majority of seats nominates the Prime Minister to be officially appointed as such by the President of the republic after consultations with all the political forces represented in the parliament. Since the 1991 multi-party elections, the socialist African Party for the Independence of Cape Verde (PAICV) and the centre-right Movement for Democracy (MPD) have dominated politics.

In contrast to many other African countries, Cape Verde’s parliamentary polls were considered to be transparent, orderly and peaceful.

The ruling African Party for the Independence of Cape Verde (PAICV), led by Janira Hopffer Almada, was defeated by the opposition party Movement for Democracy (MPD), led by Ulisses Correia e Silva, which is taking back power after 15 years.MPD won 53.7 per cent of the ballots cast against 37 per cent for the PAICV. MPD currently holds 40 seats and against the opposition’s 29.This year, a total of 551 candidates ran for election, including 73 women.

Presidential elections were held on October 2nd 2016. There were three main candidates: Jorge Carlos Fonseca (who was reelected with 74.000 votes), Albertino Graça, and Joaquim Jaime Monteiro. The president of Cape Verde is directly elected by absolute majority popular vote, in 2 rounds if needed, for a 5-year term, with eligibility for a second term.The last election had a very low tornout, only 35% of citizens voted.

Since December 2014, Janira Hopffer Almada has been the head of the PAICV and was a top contender to be the next prime minister in the upcoming Presidential elections.  Hopffer Almada campaigned along the lines of bringing about a "new economic agenda" and  promised creation of up to 25,000 new jobs, along with developments within important sectors such as tourism, agriculture and the fishing industry.  Finally, she submitted her resignation a day after the liberal Movement for Democracy (MFD) clinched a landslide victory in the municipal elections, held on the 4th of September, 2016. Cape Verde has a Legislative Candidate Quota where there should be a balances representaiton of both sexes in naitonal elections. Nevertheless, it as never had a female president and the last major candidates have all been male.

In terms of gender and women empowerment, Cape Verde stands out for its achievements in improving female political participation, not only within the African region, but also globally. According to the African Women’s Decade Mid-Term Review, in 2015, Cape Verde was ranked second in the world for the proportion of female government ministers. In general, women enjoy the same legal rights as men, including rights under family law, property law, and in the judicial system. Despite legal prohibitions against sex discrimination and provisions for full equality discrimination against women persists. Rape, including spousal rape, is a criminal offense, but the government generally has not enforced the law effectively. Domestic violence against women is widespread. The government and civil society have encouraged women to report criminal offenses such as spousal abuse but social and cultural norms as well as the lack of shelter housing inhibits victims from doing so.

Despite the country's stellar performance in upholding women’s rights, when it comes to female political participation, women continue to be politically underrepresented. Although the law in Cape Verde guarantees equal rights to men and women, traditional patriarchal stereotypes on the roles and responsibilities of women and men within the family and society remain deeply rooted and prevent the effective implementation of laws protecting women’s rights. The Electoral Code of 1999 establishes various measures for the promotion of women in public and political life but in practice, these measures are unimplemented. Considering the latest legislative elections held, only 17 out of 72 members of parliament were women (23.61%). 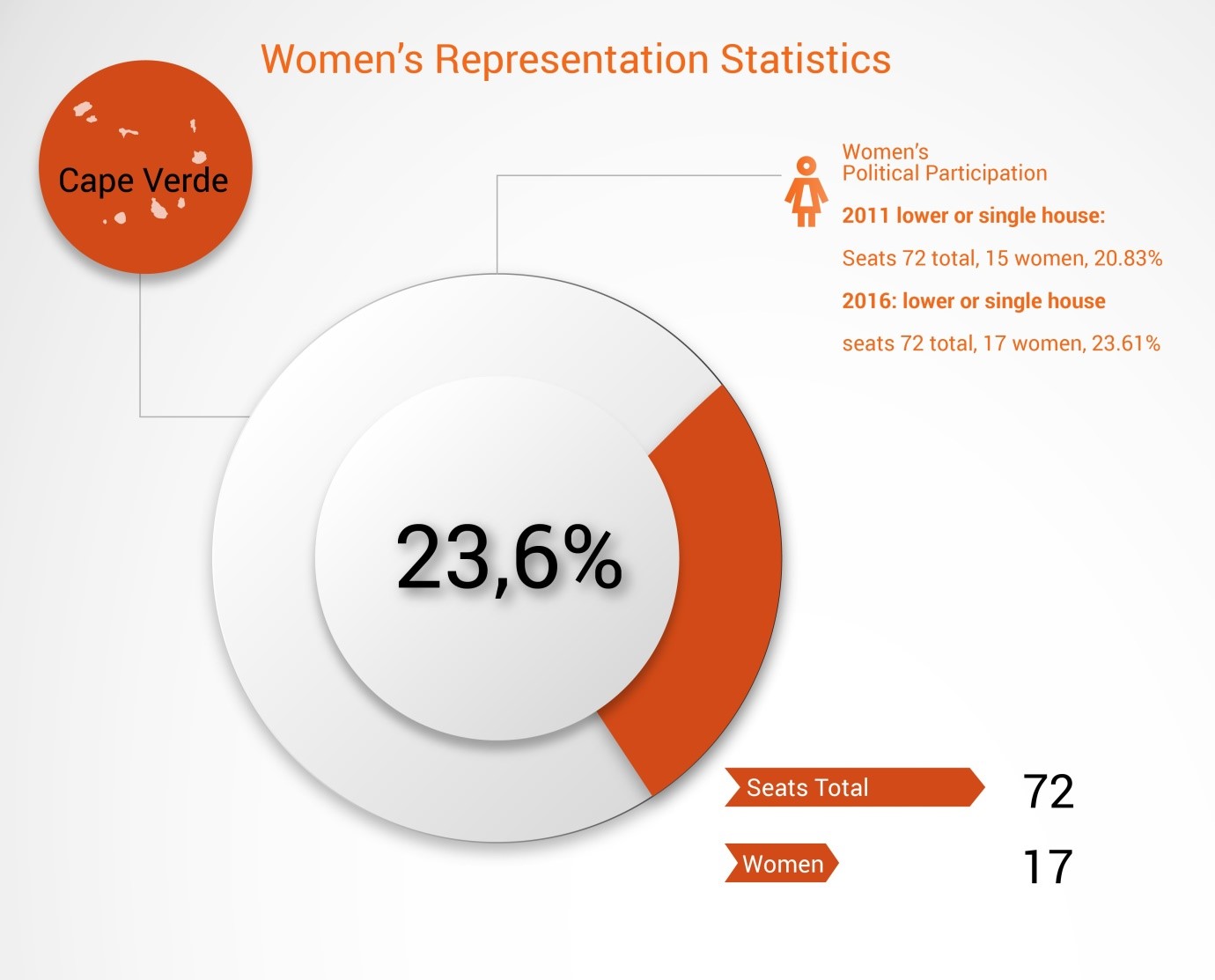