According to the 1982 constitution, there is a Unicameral Parliament with an elected President.  This February the country held both presidential and legislative elections. There were four main candidates (all men) running for president: Issoufou, Amadou, Seyni Oumarou, and Mahamane Ousmane. Issoufou won the first round with 48% of the votes, while Amadou — campaigning from prison under charges of baby trafficking — came in second with 17%. In the second round, however, Issoufou won with 92% of the votes, becoming Niger’s new President. Issoufou’s party, the Parti Nigérien pour la Démocratie et le Socialisme - PNDS won the parliament’s (National Assembly) majority of seats: 108 out of 171 seats.

Niger holds gender quota in parliamentary and local elections. The political parties must submit lists of female and male candidates. The quota follows a ‘reserved seat’ rule, meaning that the proportion of elected candidates must have at least 15% of women.  For the 2016 elections there were 25 elected women out of the 171 seats. Nevertheless, as there are no gender quotas for the presidential elections, there were no female candidates.

In 2015, the National Assembly adopted a law that raised gender quota from 10 to 15 percent for the 2016 elections. This had a significant impact on the participation of women. In 2011, women held only 3.65% of parliament seats but after the introduction of the gender quota, there has been a significant change: 14.62% of parliament seats were held by women. According to the National Democratic Institute, despite the fact that women constitute over 50 percent of Niger’s population, they continue to be under-represented in the public sphere. For instance, when it comes to the presidential election, no woman has ever been a candidate for the position. One of the reasons that have led to this situation is the literacy rate among women which is around 15%, and as one of the criteria for eligibility for political candidacy is the possession of a school certificate, few women are eligible to pose their candidacy.

The Nigerien Constitution grants equal rights regardless of gender. Although the Constitution provides for equal rights regardless of gender, women do not have the same rights as men under family law in customary courts. Legal rights as head of household apply only to men; a divorced or widowed woman, even with children, is not considered to be a head of household. Traditional and religious beliefs result in discrimination in education, employment, and property rights. Discrimination is worse in rural areas, where women help with subsistence farming and do most of the childrearing, cooking, water- and wood-gathering, and other work.  Niger has ratified both the Convention on the Elimination of All forms of Discrimination against Women (CEDAW) and the Optional Protocol on violence against women (2004). Niger has signed but not ratified the Protocol to the African Charter on Human and Peoples’ Rights on the Rights of Women in Africa.

Women’s political participation in Niger has slowly been developing in the country. Gender quotas were a big step towards the achievement of this goal, increasing the number of women in Parliament. The National Democratic Institute is also conducting an important work that will have fruitful developments in the country’s future. In 2015, the institute started working with women and youth to increase their engagement in electoral campaigns. It also organised town hall meetings, workshops, roundtables and networking opportunities to promote the inclusion of women and youth candidates. The institute also plans to work with the newly elected women on gender issues. There is still a long way to go to increase women’s political participation in the country. However, several steps that have been taken recently, could lead to a more optimistic future for the country. 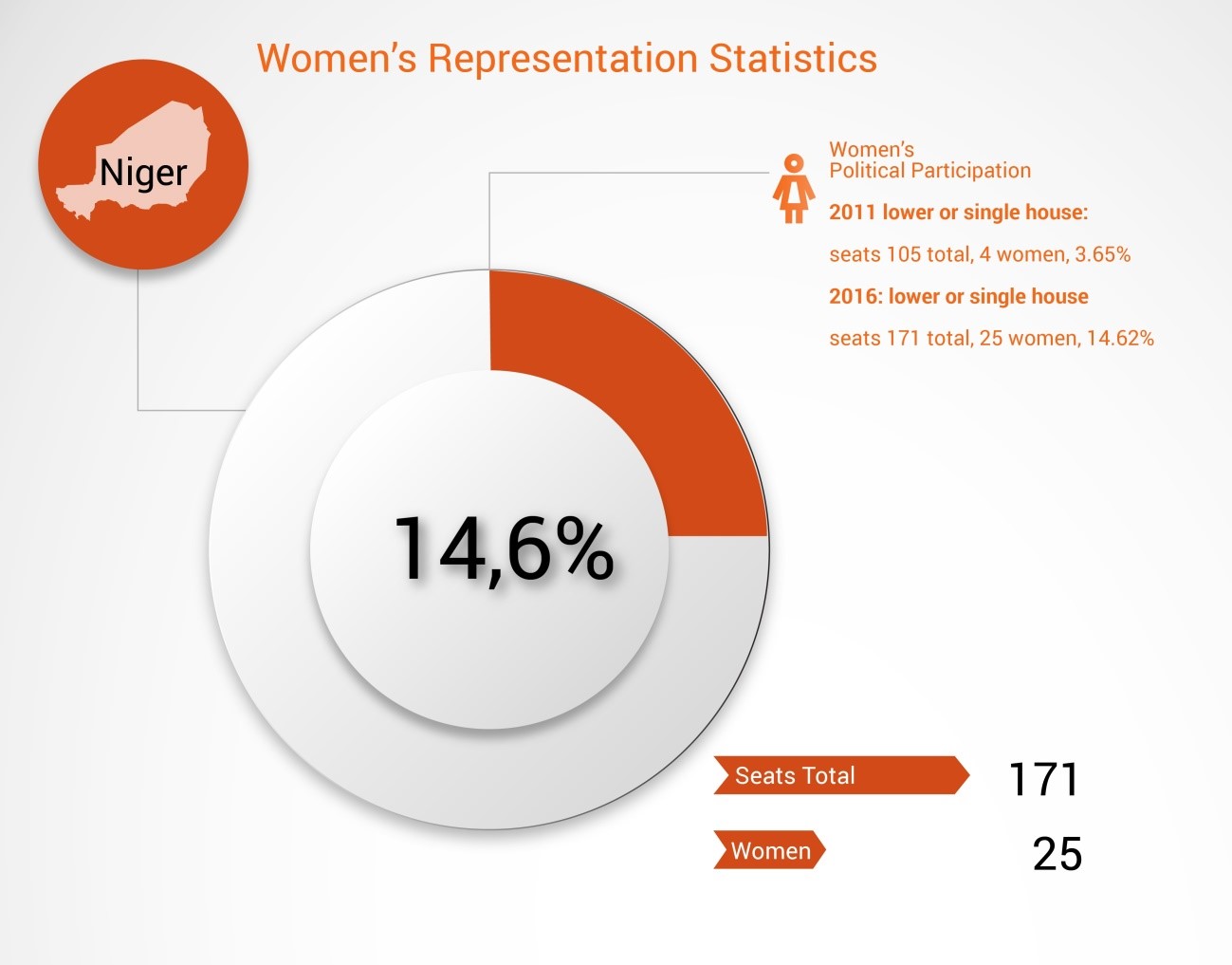