Presidential elections in Congo-Brazzaville took place on the 20th March 2016.

President Denis Sassou-Nguesso who has been in power since 25 October 1997, faced eight opponents: Guy Brice Kokelas; Jean-Marie Mokoko; Pascal Tsaty Mabiala; Andre Okombi Salissa; Claudine Munari; Joseph Kignoumbi Kia Mboungou; Michel Mboussi Ngouari and Anguios Nganguia Engabe. Claudine Munari was the only female candidate. Finally, President Sassou-Nguesso was reelected with 60% of the vote, and Claudine Munari received only 1.65% of the vote. It should be noted that there were numerous concerns raised about irregularities and the credibility of the 2016 election. This included the media blackout during the polls, an imbalanced and restrictive media environment, significant disparity in access to state resources, a short timeframe for electoral preparations, and restrictions on freedoms of expression, communication, and association in the pre-election period.  Furthermore, opposition groups clashed with government troops in Brazzaville after the election, with 17 deaths reported, and several pro-democracy activists and opposition party leaders were arrested. It seems that Sassou-Nguesso won the election due to his association with bringing peace and development to Congo-Brazzaville and the fact that many citizens wished for an outcome which would generate the least violent response from government.

Congo-Brazzaville has a bicameral Parliament comprising the Senate which is composed of 72 seats and the National Assembly which is composed of 139 seats. Under the presidential system, the Chief of State of Congo-Brazzaville also serves as the Head of Government. The position of prime minister was abolished in 2009. The president is directly elected for a 5-year term by absolute majority popular vote using the two-round system. In October 2015, a controversial referendum was held which abolished the two-term limit and age limit of 70 for presidential candidates. Article 8(3) of the 2002 Constitution ensures that women have the same rights as men. In addition, ‘the law guarantees and ensures their promotion and representation in all political, elective and administrative offices.’ Then, under Article 61 (3) of the Electoral Code as amended in 2007,15% of candidate lists must be composed of female candidates.  However, due to the lack of enforcement mechanisms, parties continue to ignore the quotas.

The issue of female participation in Congo-Brazzaville is often overlooked and the country’s record is generally poor. Claudine Munari, aged 62, has been in politics since 1992. She was Director of the Cabinet of President Pascal Lissouba from 1992 to 1997, was a Deputy in the National Assembly from 2002 to 2009 and was also the Second Secretary of the National Assembly from 2007 to 2009. More recently, she served as Minister of Trade and leader of the MUST political party. In her presidential campaign, she presented herself as an activist for both unity and in the battle against youth unemployment. Claudine Munari follows Ms Gilda Rosemonde Moutsara Gambou of the Free Conscience Party who did declare her candidature in the 2016 election but did not continue, and Ms Angele Bandou, a nun, who ran in the 1992 and 2002 elections but did not have great success. As Sylvie Marceline Bokamba-Yangouma, Congolese representative of FCEM, highlights, the view on women’s participation is one of hope: ‘Regarding the sole female presidential candidate, I personally am very happy even if there is only one woman in the running. This is already something to be proud of. I firmly assure that there will be more and more female candidates in the future’ .

Congo-Brazzaville committed to eradicating gender-based violence by signing the United Nations Convention on the Elimination of All Forms of Discrimination Against Women (CEDAW) and the African Charter on Human and Peoples’ Rights (ACHPR). There are various laws and regulations: the Penal Code of 1810, the Family Code of 1918 and the Child Protection Act of 2010 which provide protection for women and girls in general, including victims of violence. However, access to justice for women and girls is not easy as the laws and regulations are often not implemented.Rape, including spousal rape, is illegal but  as the government has not effectively enforced the law, rape is common and because of lack of data the extent of the problem is unknown. Domestic violence against women, including rape and beatings, is widespread but rarely reported. Family or village traditionally dealt with domestic violence matters, and only extreme incidents were reported to police because of victims’ fears of social stigma and a lack of confidence in the judicial system. Customary marriage and family laws discriminate against women. Adultery is illegal for both women and men. Polygyny is legal while polyandry is not. The law prohibits discrimination based on gender and stipulates that women have

the right to equal pay for equal work but remain underrepresented in the formal sector of the economy.  Women in rural areas are especially disadvantaged in terms of education and wage employment, and are confined largely to family farming, small-scale commerce, and child-rearing responsibilities.

Gender parity in Congo-Brazzaville is and will be an issue as laws are not well-implemented. It is essential to boost women’s political participation by advocating, raising public awareness and promoting equality between men and women in all spheres. 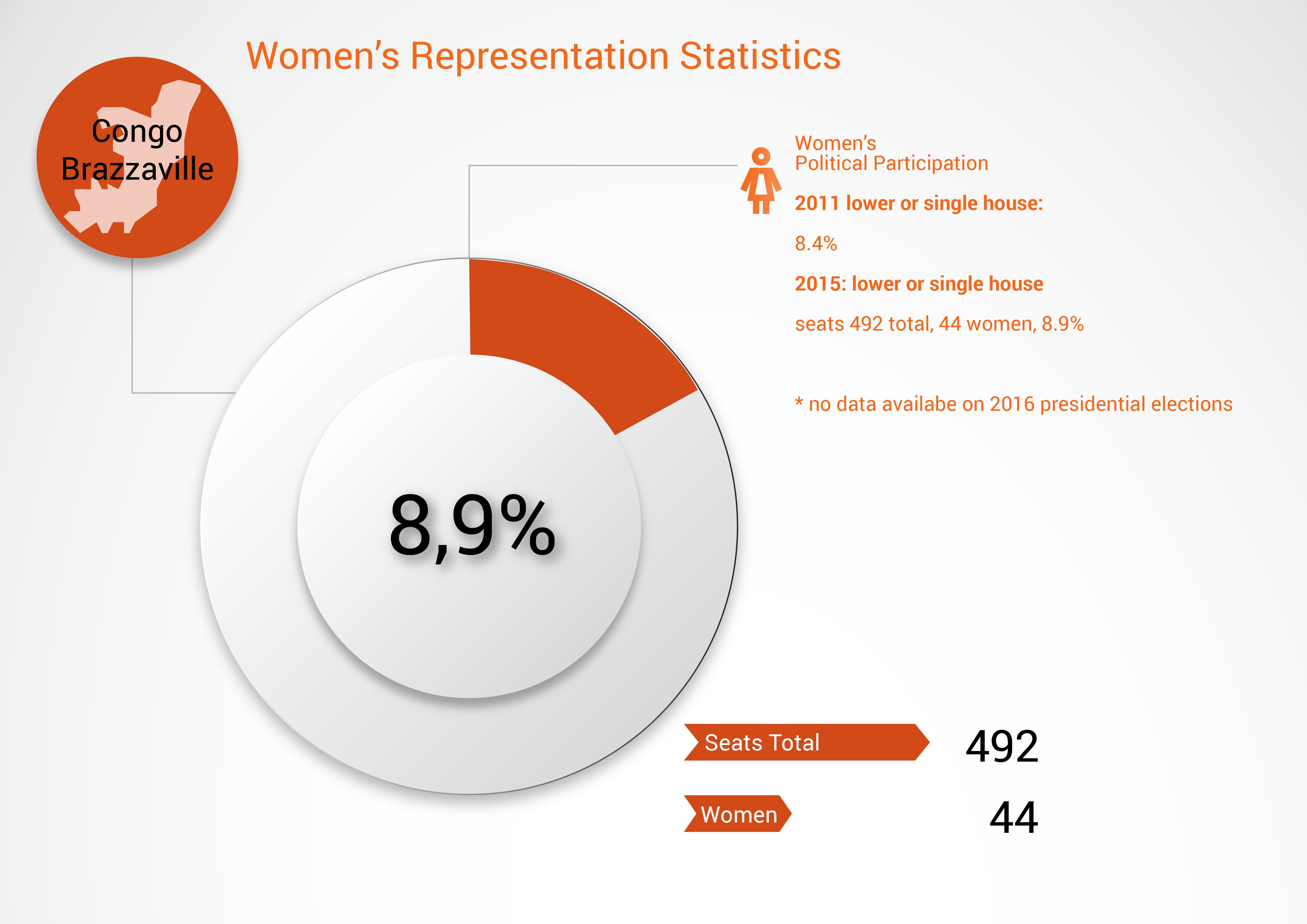