Parliamentary elections in Morocco took place on the 7th of October, 2016.

Around 16 million Moroccans of the country's 34 million were registered to vote. Candidates from 30 parties competed to win seats in the 395-member Chamber of Representatives, the lower house of parliament. The ruling Justice and Development Party remained the largest party, winning 125 of the 395 seats in the House of Representatives, a gain of 18 seats compared to the 2011 elections. Abdelillah Benkirane was reappointed Prime Minister by the King on 10 October.

A constitutional monarchy, Morocco's parliament is made up of two directly elected chambers: the 395-member House of Representatives (the lower house) elected for a 5 year term, and the 270-member House of Advisers (the upper house) elected for a 9 year term. Out of 395 members, 305 are elected in multi-seat constituencies from electoral lists put together by the parties, while 60 seats of the remaining 90 are reserved for a national list of women. The rest 30 seats are reserved for candidates under the age of 35.  While Morocco has a gender quota for Chamber of Representatives, there is no quota for the Chamber of Advisors.

Although the Moroccan Constitution guarantees equal rights for women and men, significant challenges to women’s political participation persist. Morocco adopted CEDAW (Convention on the Elimination of all forms of Discrimination Against Women) on the June 21st 1993 with reservations. The government expressed its readiness to apply the provisions of CEDAW provided that, among other provisions, it did not conflict with the provisions of Islamic Sharia. Morocco has not ratified the Maputo Protocol.

While women’s increased representation in Parliament is significant, the overwhelming majority of women elected only ran on women’s national lists, rather than on local district lists. This suggests there is a limited constituency willing to elect women to parliament.

Despite many constraints, women politicians have been in leadership positions. In 2012, for the first time in the history of Morocco, a veiled political figure, Bassima Hakkaoui took over as Minister of Solidarity, Women, Family, and Social Development. This move is emblematic of the new opportunities created for women by the Arab Spring. Women have also achieved senior leadership roles, such as the leader of the Unified Socialist Party , Nabila Mounib, the first woman to be elected as a party leader in Morocco.

In terms of gender equality, the Family Code continues to contain discriminatory provisions for women with regard to inheritance and the right of husbands to unilaterally divorce their wives. Implementation of reforms in favour of women has remained a major problem in the country. According to Amnesty International, domestic violence remains widespread in the country- spousal rape is not considered a crime. In terms of abortion laws, authorities said that access to abortion would be extended to women whose health was at risk due to foetal impairment or who were pregnant as a result of rape or incest; the authorities had not published draft legislation by the end of the year. The government also failed to move forward on a draft law, announced in 2013, criminalizing violence against women and children. Thus, women continue to face discrimination in law and in practice.

It is important to keep in mind that it is due to broad-based women’s movement in Morocco that has been most instrumental in driving progress in women’s political voice in Morocco. According to the Overseas Development Institute, this has been coupled with partial democratisation and the opening of political space; effective political leadership and support from the monarchy; and some important socio-economic changes.

Although women’s increased participation in political processes have been instrumental in bringing about significant reforms, policy change is slow and incremental. Hence, although a lot is put on paper, it is time for Morocco to take action by actual implementation of reforms and bringing about real changes in discriminatory socio cultural practices. Policy-level progress must thus be seen as a critical first step towards women’s rights in Morocco.

Importantly, in order to combat human rights violations, more steps need to be taken to bring down gender based and discrimination women. Education for girls as well as human rights training for professionals needs to be implemented, and a culture of impunity which is a major weakness of the Moroccan bureaucratic system must be tackled. Female victims’ rehabilitation and safety must be emphasised. Much needs to be done in terms of access to healthcare as well, as women must also be able to fully exercise their sexual and reproductive rights in the country. 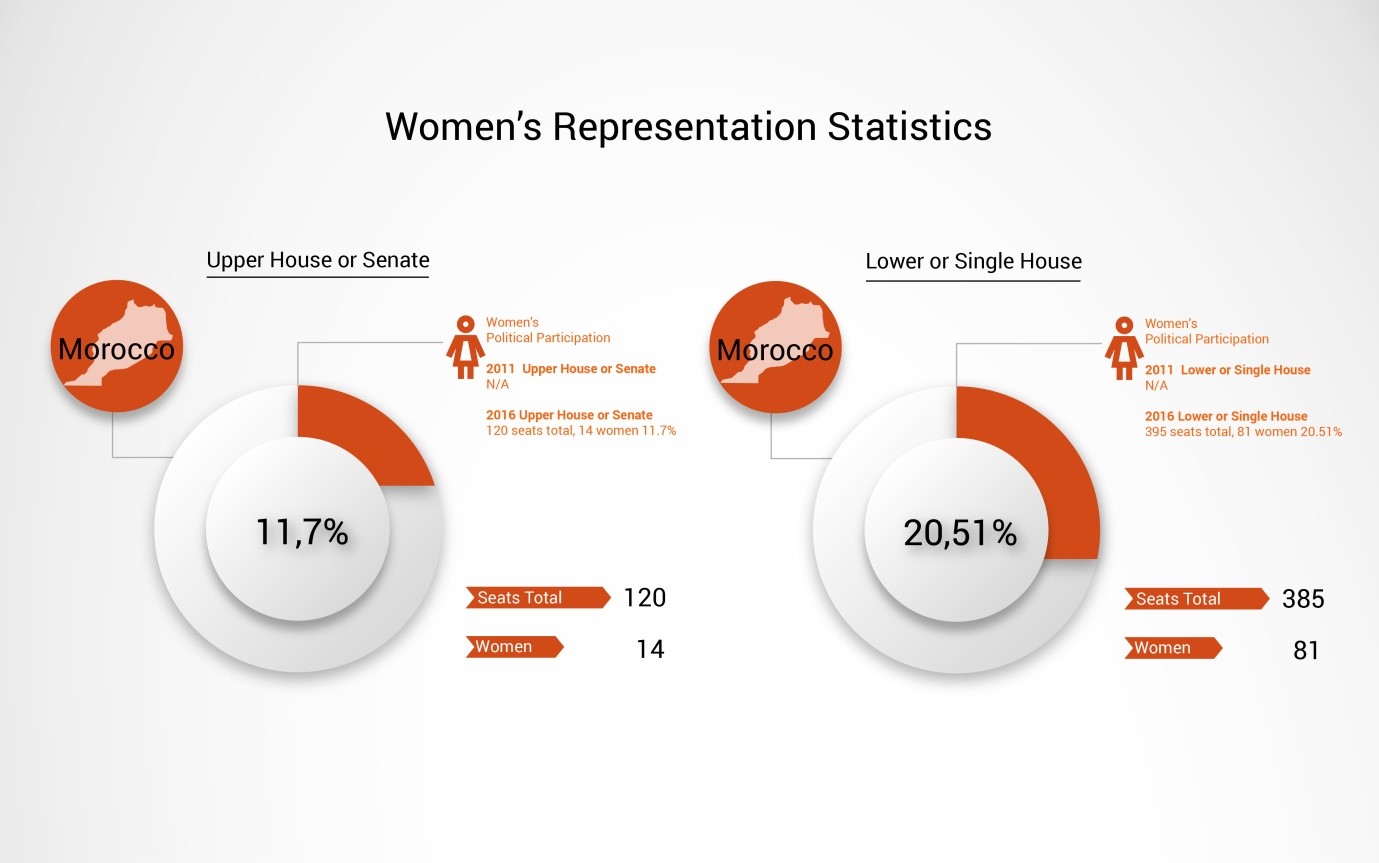