The Botswana Democratic Party, which has been in power for 53 years, won the majority of parliamentary seats, winning 29 out of 57 contestable seats in the National Assembly to have Mokgweetsi Masisi elected the president.

The 2019 election was the most closely watched election since Botswana’s independence because of the political drama within the winning party, BDP. The current president, Mokgweetsi Masisi, succeeded the ex-President Khama in April 2018 when Khama had served the maximum 10 years term. The relationship between the two president turned sour, with Khama leaving the BDP and endorsed Duma Boko, who was the candidate of the opposition party: the Umbrella for Democratic Change coalition (UDC). UDC first became BDP’s official opposition party in 2014, when the party secured 30% of the seats in the National Assembly. Another candidate for the 2019 election was Biggie Butale, who was the leader of the newly formed party Botswana Patriotic Front, which was also supported by Khama. The fourth candidate was Ndaba Gaolathe from the Alliance for Progressive party, and Gaolathe ran on the promise to revolutionize the country’s economy.

Despite being one of the most progressively democratic countries in Africa, Botswana still faces challenges in increasing women’s political participation. For the 2019 election, only 3 women won seats in the National Assembly and only 11 women candidates ran for parliamentary positions. This was a decrease from the 2014 election, where 4 women were elected out of 17 female candidates. Although 55% of the voters were women, only 5% of Botswana women held political positions. Researchers from Gender Link and Emang Basadi arguest that the low percentage of women’s political participation reflects on the patriarchal culture in Botswana electoral system. Having a society that only praises men as leaders leave many capable women to doubt their own ability to run for office. This, thus, results in less and less women wanting to put themselves forward and fight for political leadership. In response to the concern of low female political participation rate, President Mokgweetsi Masisi promised to appoint more women to National Assembly’s special seats. However, President Mokgweetsi Masisi still passively blamed the low rate on women’s own lack of ambition to run for office.

Overall, women’s participation in Botswana’s presidential election is still extremely low and rare. The number of women holding parliamentary seats seems to only be decreasing, and the government is not doing anything to address the large gender gap in politics. Gender Link is calling the government of Botswana to consider changing the electoral system from first-past-the-post system to the proportional representation electoral system to effectively increase women’s political representation. It is now an urgency for Botswana to increase women’s political participation. 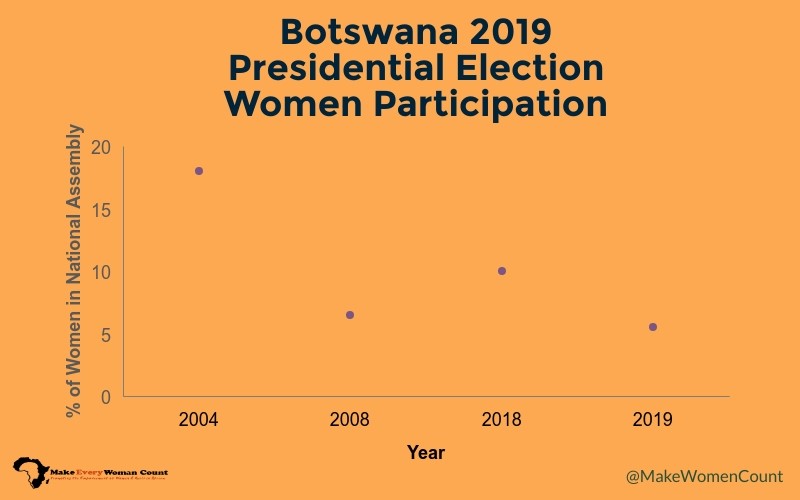