Djibouti’s Presidential Election were held on April 9, 2021 with the incumbent candidate Ismail Omar Guelleh securing over 97% of the votes. The other opposing candidate , Zakaria Ismail Farah, garnered 2.48% of the casted votes. The election was boycotted by the traditi onal opposition amongst other challengers who shunned the elections claiming that it would not be free and transparent. President Guellah , who has been in power since 1999, won a fifth and supposedly last five - year term since by 2026 he will be over the 75 - year age limit set by the Constitution.

The Republic of Djibouti is a representative presidential democracy where the president serves as both the head of the state and the head of the government. Djibouti also has a unicameral National Assembly tasked with legislative functions. Although the Constitution of Djibouti has no affirmative action provisions, it explicitly proclaims equality regardless of Gender. Amendment to the electoral law on 11th January 2018, however, fixed the quota of women that are elected to the National Assembly at no less than 25%. The law also provides that the proportion of either male or female candidates on the lists of candidates submitted by political parties and/or political party groupings must be 25% of the number of seats to be filled less the list becomes inadmissible. A presidential decree requires women to hold at least 25 percent of all high-level public service positions, although the government has never implemented the decree.

The introduction of a 25% quota for women in January 2018, following a self-assessment exercise on gender sensitivity in December 2017 caused a substantive change in women’s political participation in Djibouti with the number of women more than doubling from seven to fifteen on 23rd February 2018. When the Cabinet was re-appointed, the total number of women parliamentarians totaled 17. This represented a percentage increase from 23.08% to 26.2%. Within the parliament, the number of women selected for leadership positions also increased as indicated by the number of committees led by them. The percentage of women in the Cabinet was, however, lower at 13%. Djibouti’s women in parliament rank according to IPU was 79 as of 2021.

Conflict and crisis in neighbouring countries make Djibouti an island of stability in the region. This stability coupled with rare anti-government protests provides a safe and secure environment for the promotion of women’s rights in the country.  The problems of violence against women, for example, has received significant attention from the government through the enactment of laws that prohibit rape and domestic violence. The Protection Law, which provides a more comprehensive set of laws that promote women’s rights in Djibouti, specifically instructs ministries and public institutions to take all necessary measures to prevent and combat violence against women and children, including “economic violence,” such as any discrimination that would lead to preventing a woman’s economic or financial development. Furthermore, through the Protection Law, the government’s efforts towards addressing violence against women can be portrayed by the creation of a support fund for victims as well as integrated care centres that provide medical and psychosocial support. Commitments from the government towards promoting women’s affairs have also been extended to other harmful customs such as FGM through the enforcement of measures that constrain their practice.

Generally, peace in Djibouti has provided the requisite stability necessary in the advancement of women’s rights across the social, economic and political life. The enactment of laws such as the 25% quota and the Protection Law is a remarkable display of the country’s dedications towards achieving gender equality. 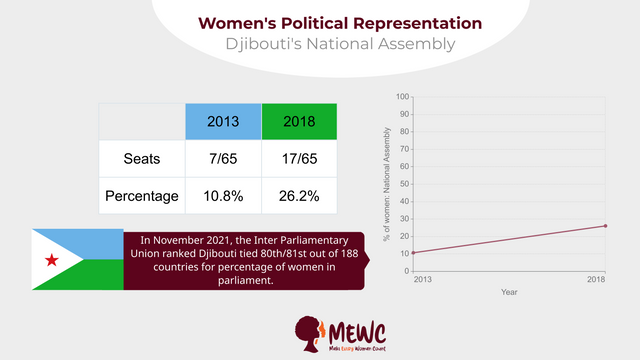