The Central African Republic’s 2020-2021 elections were concluded on the 18th of January, 2021 with the reelection of President Faustin Archange Touadera of the United Heart Movement party. He won the election garnering 53.16% of the total votes thereby marking his second term in office. He was followed by former prime minister Anicet Georges Dologuélé, with 21.69% of the total votes. Although opposition candidates vehemently refuted Touadera’s win; attributing it to electoral fraud and low turnout of voters, the constitutional court has dismissed these claims as illegitimate. Of the 17 candidates accepted by the constitutional court of the Central African Republic for the Presidential Elections, only one was a woman: Catherine Samba-Panza, the first female head of state in CAR who had previously served from 2014-2016 as transitional President.

Notably, this election was marked by a wave of violence both pre and post. Since its independence from France in 1960, followed by a violent overthrow of then-President Francois Bozize which led to a religious civil war in 2012, and then Catherine Samba-Panza’s transitional tenure in 2014, the landlocked Central African Republic has been largely unstable. According to the UNHCR, around 60,000 people have fled the 2020 election violence since December; crossing the border into neighboring Cameroon, Chad, the Democratic Republic of the Congo (DRC), and the Republic of Congo and more than 200,000 remain displaced.

Politics in the Central African Republic occurs within the framework of its semi-presidential 2015 constitution; where the president is the head of state and the prime minister, the head of government. Its bicameral parliament consists of a National Assembly and Senate.

The first National Assembly elected in 1959 had no female members. However, 5 years later, in 1964, 31-year old Marthe Matongo became the first woman to be elected into the 105 seat National Assembly. A politician, women’s rights activist as well as the founder of the Union of Central African Women, Marthe Matongo was a candidate in the 1964 one-party parliamentary elections and served in the National Assembly from 1964 to 1966. By the first multi-party elections which followed in 1993, women formed 3.5% of the members, rising to 6.4% in 1998 and then to 10.5% in 2005. By 2016,

Catherine Samba-Panza was the first female head of state and the first woman to lead the country as transitional president in the wake of its 2013 political crisis. Her entry into politics began during the 2012-2013 conflict when she was appointed Mayor of Bangui, the nation’s capital city. As a result of her reputation for neutrality and incorruptibility, after President Michael Djotodia’s resignation in 2014, she was elected by the National Transitional Council (CNT) to serve as interim president, transitioning the war-torn Central African Republic to the 2016 elections where President Touadera took the reins. She remained very vocal about increasing women’s political participation, promoting and encouraging the nomination and candidature of women for presidential and legislative elections. She contested for the 2020 Presidential Election independent of any political party. However, she received only 0.9% of the vote.

Partnering with international bodies such as the PeacLebuilding Fund, the Governments of Canada and Sweden, UNDP, and UN Women, the government of the Central African Republic sought to institutionalize the role of women by adopting a gender-sensitive law called the Parity Law which was passed into parliament in 2016. The Parity Law provides for a 35 percent quota for women in all decision-making bodies (both public and private sectors). Although a National Gender Monitoring Observatory was set up to ensure compliance, implementation of the parity law remains a challenge due to lack of enforcement.

Over the past years, there has been a decline in women’s representation in parliament. As of 2012, women formed 12.3% of its members. However, since 2017, women held only 8.57% of the total proportion of seats in the national parliament and less than 15% of cabinet positions; out of 140 seats in parliaments, only 14 were occupied by women. All despite the Parity Law that mandates women to hold at least 35% of nominative and elective positions in public sectors. This might be attributed to structural barriers within political parties as well as unfavorable economic conditions (considering the nation’s highly volatile state) and social and cultural norms that disproportionately affect women.

Leading up to the 2020-2021 Presidential and parliamentary elections, UN Women, in partnership with UNDP, MINUSCA, and the European Union, also advocated for a gender audit and gender strategy for the National Elections Authority and revisions to the 2019 Electoral Code to increase women’s political participation at all levels. As a result, women represented 38% of local electoral authorities in contrast to 11% during the 2015 elections. During the first round of 2020-2021 legislative elections concluded in December, only two women were elected and emerged as parliamentarians. Nonetheless, Bernadette Gomina, Member of Parliament for the administrative division of Bayanga, in the south of the Central African Republic who was elected in 2015 and reelected in 2020 maintains that more women are expected to participate in the second round of elections slated for March 2021. 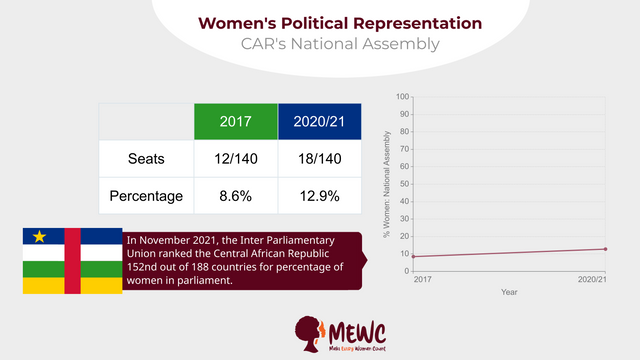