The Côte d’Ivoire National Assembly elections took place peacefully on March 8th 2021, with a clear absolute majority going to the already ruling party, Houphouëtists for Democracy and Peace party (RHDP), the same party that the current Ivorian president Alassane Ouattara belongs to. The election followed a tumultuous presidential election five months prior, where roughly 80 were killed and an opposition boycott staged.

The parliament of Côte d’Ivoire operates in a bicameral system, meaning that legislature is made up of two houses. The National Assembly is the lower house within this.

The National Assembly election in 2021 involved 1504 candidates, from each of the 204 constituencies all campaigning for the 255 seats available within the National Assembly. RHDP came out on top, holding 62% of seats with PDCI-RDA holding the next greatest percentage of seats at 26%. The rest were distributed amongst smaller parties. The two main candidates for the president of the National Assembly were Amadou Soumahoro and Eliane N’Zi, with Soumahoro of the RHDP coming out on top and securing 158 of the necessary 128 majority votes.

The political system of Côte d’Ivoire is one of a democratic republic, headed by a president who overlooks both state and government.

There is an electoral quota for women, in all political elections whether they be at the national assembly/senate level or at the regional/local level. The Promotion of Women’s Representation in Elected Assemblies Act 2019 indicates in Article 3 that there must be a minimum of 30% of candidates who are women in every election. This applies to both majority and proportional representation systems (distributed in a zebra system, where candidates of alternating genders are listed that way). If the number of women candidates representing a party reaches 50%, said party will also benefit from additional public funding.

Despite this law on quotas for women candidates being passed two years prior to the 2021 National Assembly elections, women still remain underrepresented both in parliament and in external political parties. Only 14% of women in parliament are women following this election, holding just 36 of the 255 seats. In the lead up to the 2021 elections, no parties had reached the female candidate quota of 30%. However, the youngest member of parliament Naya Naomi Jarvis Zamble aged 25, is female. This bodes well for the representation of young women in the country at a decision making level. Furthermore, the number of female representatives increased in the 2021 election by 7, from 29 in the 2016 elections to the current 36.

Although half of all registered voters in Côte d’Ivoire are women, little progress in terms of women’s political participation has been made when compared to previous years and previous elections despite this fact and the presence of the aforementioned quota. This may be due to a lack of shift in mindset from stereotypical perceptions of a woman’s place in Ivorian society, restricting their access to leadership positions.

This discrepancy between women’s participation at lower levels and women’s representation at higher levels can be seen elsewhere in Ivorian society. For example, Côte d’Ivoire relies heavily on agriculture for its wealth, and land is a precious asset in the country. 43% of women participate in the largely agricultural workforce, yet lack access to land rights as there are customary laws in place that favour men. This further shows how women are crucial to the running of the country, yet continue to have very little representation and say at the decision making level.

Generally, there has been an increase in women’s political participation in Côte d’Ivoire since the previous national assembly election. However, despite Côte d’Ivoire having the legislature in place to increase women’s political participation and representation within the National Assembly, fulfilling the quotas set out was less successful. A lack of female representation at the National Assembly level does not bode well for women’s rights in other areas of Ivorian society, as it consequently means a lack of decisional power for women. A real effort to ensure that the quotas for female candidates are not only stated but also fulfilled prior to each election may begin to undo this problem. 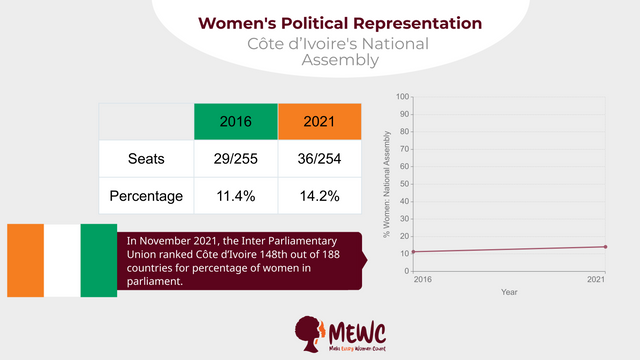