Chad’s Presidential Election took place on 11th April 2021. The incumbent President Idriss Déby was re-elected for a sixth term, taking almost 80 percent of all votes. The voter turnout was just under 65% in as much as the opposition called the registered 7.3 million voters to boycott the election. The 2021 Presidential Election included 10 Presidential candidates for the presidency. Of the selected 10, 3 candidates later withdrew from the race in the face of violence and intimidation by the state’s security forces. Among the remaining presidential candidates was one woman named Lydie Beassemda.

Elections in Chad traditionally occurred after every 5 years before the newly adopted 2018 constitution and its further amendment in December 2020 introduced 6-year term limits effective from 2021 elections. The elimination of the Prime Minister’s post by the constitution faced criticism from opponents who claimed that the constitution was creating a fully presidential system that could potentially install a de facto monarchy in Chad. However, following the death of President Idriss Déby shortly after elections, the Prime Minister’s post was reinstated by the transitional military council. Prior to Lydie Beassemda’s presidential aspirations, no woman has vied for presidency.

Chad is currently controlled by the Transitional Military Council with a unicameral parliament composed of 93 members appointed by Mahamat Déby. Although 32% of the representatives are women, there is no law establishing quotas for women. The lack of a legal framework establishing parity or quotas makes it difficult for women to gain access to political office. Most political parties agree on the need to involve women in politics, but it is rare to find women in decision-making positions. The Constitution of Chad (Article 14), however, assures the equality between men and women and guarantees the protection of women’s rights in all the domains of public and private life.

Lydie Beassemda, 54, the sole female candidate, ran under Party for Democracy and Independence in Chad’s 2021 Election. Ms. Beassemda is a former agricultural minister and she pitched her campaign on breaking down ethnic rivalries and improving women’s rights. Previous Presidential Elections have never featured female contestants making Ms. Beassemda the first woman to run for office of the president of the Republic of Chad.

Currently, 32.2% of the seats held in the National Assembly belong to women. This is a significant increase from 14.9% in the 2016 and the 2011 legislature which according to World Classification, was also 14.9%. However, the World Economic Forum’s Gender Gap Score found that Chad’s overall rank fell from 147th place in 2018 to 148th in 2020. This downward trend is also noted by the Global Gender Report which highlights a fall by 28 ranks in the Political Empowerment sub-index from 2006 to 2021 with its latest rank standing at 119 out of 155. The report, also show that 15.4% of women sat in Parliament compared to their male counterparts, who dominated the Assembly, holding 84.6% of the seats. However small the increase is from 2016, the trajectory is encouraging although the number of women holding ministerial positions fell from 25.9% to 20%.

According to Chad’s 2020 Human Report, there are no explicit laws that limit the participation of women or minority groups in the political process. On the contrary, Chad has a strong constitutional framework for equality which includes the states obligation to eliminate all forms of discrimination against women, and has made some progress towards achieving women’s rights to equality, even in a very precarious and fragile social-economic environment. Some of the progress made so far are enshrined in laws which decree leadership of all political parties must include at least 30 percent women. The law also establishes the principle of parity in nominations and elective offices with a requirement of 30 percent women at a minimum increasing progressively toward equal representation of men and women. Several factors such as lack of access to campaign funds and cultural norms, however, discourage women’s political participation and activism. The influence of cultural norms over women’s rights is still quite significant in Chad also in matters such as inheritance and Female Genital Mutilation.

The restoration of relative calmness by Chad’s Transitional Military Council resulted in the formation of a new government with a cabinet composed of 40 members out of which 9 are women. Lydie Beassemda,a former minister under late President Idriss Deby, was appointed among the 9 female ministers to head the higher education and research ministry. Although women in the government have increased, this only represents Council’s choices rather than the people’s democratic rule. Criticism has been launched at the composition of the interim parliament, the National Transition Council, claiming that it will skew the much expected dialogue towards the return of civilian rule. Elections scheduled after the lapse of the 18-month mandate period will largely determine the country’s commitment at maintaing the number of democratically eleceted women representatives above 30%.

The April elections and the death of Idriss Deby brought a short period of uncertainty but the establishment of a new government and National Assembly with more women’s participation is a good indication of political good will towards engaging women in politics. Chad’s rank on the Gender Gap Index, however, needs more than political good will. Changing the country’s social institutions and cultural norms can be of significant importance if more women are to be democratically elected. Ms Beassemda’s presidential aspiration is a great breakup with a past that did not engage women in running for the highest office and an exemplary illustration to future female aspirants. Furthermore, the appointment of Ms Beassemda as a minister, despite opposing the late president, and 30 women to the National Assembly is a remarkable dedication in the involvement of women in the national politics and most importantly towards peaceful dialogue. The elections after the 18-month mandate period will be an opportunity to see if women’s political participation will further be entrenched. 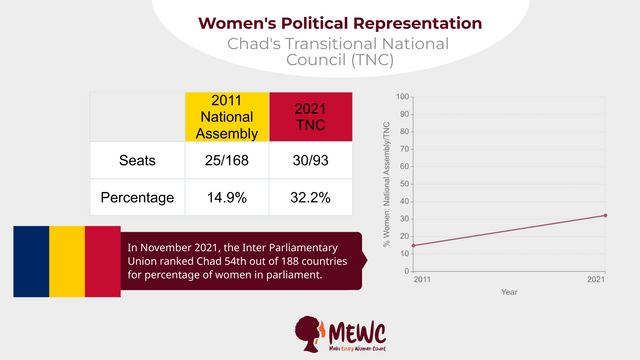