Gabon’s Senatorial Election results were revealed on February 1, 2021. According to the first round of results, the currently ruling Gabonese Democratic Party (PDG) won with 45 out of 52 seats secured for its members. Five senators of either the opposition or independent party were voted for on February 1, and there are so far two seats remaining to be filled during the second round of elections. The second round of elections, though expected to take place on the 6th of February, is yet to be accounted for.

In 1960, Gabon gained independence from French colonial rule and began its autonomous governmental rule with two political parties: the BDG (le Bloc Democratique Gabonais) and the UDSG (L’Union Démocratique et Sociale Gabonaise). By the '70s however, political rule over Gabon’s affairs was handed to the Gabonese Democratic Party. After two decades, it transitioned to a multiparty system and embraced a new constitutional framework in 1991 that put an end to the Gabonese Democratic Party’s rule and welcomed more parties into political leadership.

Gabon runs as a republic under presidential rule. The National Assembly comprises 120 deputies, who run for a 5-year term. Through universal suffrage, a president is elected and runs for 7 years. The Gabonese Democratic Party is currently still in control over Gabon’s governmental affairs, with a sizable majority of seats claimed in the country’s parliament. Amidst a presidential election on August 30, 2009, Ali Ben Bongo was pronounced president and violence reportedly ensued against opposition party members and there were various allegations of election fraud. In 2021, for the first time in Gabon’s political history, a woman by the name Rose Christiane Ossouka Raponda, was appointed as Prime Minister.

Gabon’s constitution boldly supports women’s equality and ratified the Convention on the Elimination of All Forms of Discrimination (CEDAW). However, few improvements have been made to actually recede discriminatory laws. Additionally, women in Gabon continue to struggle against legal, social, and cultural obstacles keeping them from experiencing full equality. Gabon’s legal code comprises laws regarding marriage, divorce, child custody, the minimum age for marriage, etc. However, the government lacks in its implementation of laws to eliminate domestic violence against women. Additionally, women who have been victims of trafficking and work as domestic workers face sexual harassment and they lack access to legal support against this injustice.

Gabon has the opportunity to improve with its first female Prime Minister Rose Christiane Ossouka Raponda. She announced in late March 2021 that three bills aimed at combating violence and discrimination, as well as strengthen gender equality were going to be presented to the Parliament. Usually, only the man in a marriage was allowed to bring up the issue of adultery as a reason for divorce before a judge. With the proposed bills, adultery would be enough reason for divorse. Additionally, a woman under the new laws would no longer be obliged by law to obey her husband. Moreover, the new laws would change the criminal code and civil code that still gives authority to the man as the head of the family.

Prime Minister Ossouka further stresses that the government hopes to protect the family during cases of domestic violence. With the new laws potentially shifting authority from the husband, there is hope for more autonomy of women in the home during situations of domestic violence. On the topic of abortion, a woman would no longer need to prove her state of distress to receive abortion services. Though the new laws are paved with good intentions to promote women’s rights in Gabon, they are still being debated in the National Assembly and the Senate. Also, Gabon is ranked as 41st out of 48 Sub-Saharan African countries when it comes to promoting women’s rights. So, there is a lot of room for improvement.

Recent data shows that 17.9% of seats in Gabon’s national parliament are occupied by women. In 2020, the number dropped to 14.9%. Also, there is no empirical data on the effectiveness of policies implemented by Gabon to promote gender equality and women’s empowerment. Gabon needs a stronger representation of women in the national parliament to promote more recognition of women’s needs in policies being pushed. New laws proposed under Prime Minister Ossouka’s leadership should aim at increasing the political participation and leadership of women in the country.

Gabon has made a formidable step in the right position by welcoming Ossouka as Prime Minister. Additionally, the country’s First Lady Sylvia Bongo Ondimba established the Gabonese Women and Leadership to promote women’s empowerment in the country. Her recognition of the struggles women face in Gabon--such as sexual violence, inadequate access to education and healthcare, human trafficking, and FGM--and her determination to improve women’s wellbeing nonetheless shows that work is being done to make progress and equality for women achievable in Gabon. With Prime Minister Ossouka in power and new laws prioritizing women’s needs, Gabon can see a future with women empowered economically and politically. 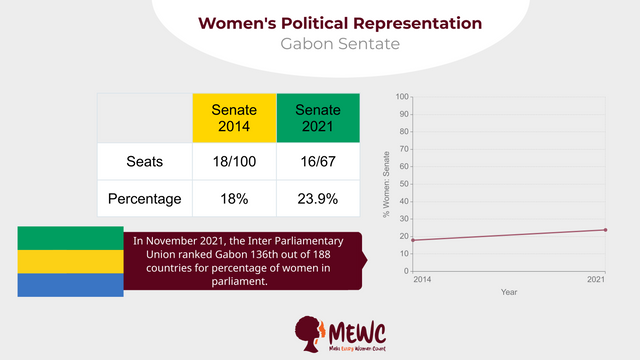