*Somaliland is an autonomous region of Somalia, which declared independence in 1991. Somaliland is not recognised as an independent sovereign State by the African Union or any foreign government. Nonetheless, Somaliland has held elections since 2003, and in 2017, the European Union sent a delegation to observe the presidential elections. Although not a recognised State, as part of the project to monitor elections and women’s political participation in Africa, the following PPM report analyses the most recent election in Somaliland and the participation and representation of women.

Somaliland’s parliamentary elections took place on 31 May 2021. This election was the first parliamentary election since 2005. The 2015 presidential and parliamentary elections were postponed following drought and political controversies. The voter turnout was around 64% of 1,065,847 registered voters. The polls were fairly peaceful. However, during the campaigning period, security forces harassed and detained some opposition candidates. The three parties, namely The Somaliland National Party (Waddani), Justice and Welfare Party (UCID) and The Kulmiye Peace, Unity and Development Party, put forward 246 candidates who competed for 82 seats in the House of Representatives. Of the candidates, 13 were women. No female candidate was elected. On 6 June, the National Electoral Commission announced that Waddani had won 31 seats (37.8%), achieving plurality. Since no party had received an outright majority (42 seats), Waddani and UCID announced they would form a coalition.

Before the election, political parties and the Somaliland government took several measures to promote women’s participation. The three political parties agreed to present at least six female candidates for parliament (one for each region). President Bihi also waived registration fees for women and minorities, which had been a barrier to their ability to become political candidates. These voluntary measures followed a proposed parliamentary gender quota, which was ultimately not included in the October 2020 Elections Law.

Women’s participation in political and administrative power structures and national decision-making processes has been a core issue for the autonomous region’s women’s rights advocates since Somaliland declared its independence. Women’s rights to stand for election and vote were granted in 2002 as part of the change from a clan-based representation system to electoral democracy. However, Somaliland’’s conservative patriarchal society and the absence of effective government policies that aim to enhance women’s political participation have made it difficult for women to be elected. Although constitutional provisions guarantee equality before the law, the idea of instituting a gender quota, whether at the constitutional, electoral, or political party level, remains controversial and elusive. Women’s groups in Somaliland and the international community have been pushing for a gender quota since the 2005 Parliamentary elections, in which 2 out of 7 women candidates were elected.

The first official attempt at dealing with women’s under-representation in Somaliland appeared in the Amended Presidential and Local Councils Elections Bill submitted to the House of Representatives in July 2007. The Bill was set to introduce quotas, in the form of reserved seats, at the local councils for women, excluding minority groups. The upper chamber, the House of Elders, rejected the Bill claiming it contradicted specific constitutional provisions. Nonetheless, the House of Elders (Guurti) later accepted the constitutionality of a gender quota, albeit in principle, and passed a proposal for more comprehensive national consultation.

In the 2010 presidential elections, the manifesto of former President Ahmed Mohamed Mohamoud’s Kulmiye Party included a 25% quota for women. The statement led to much anticipation of a legal gender quota following his victory in the 2010 election. The Kulmiye Party increased women’s leadership roles in the government by appointing women to three Ministerial-level positions and establishing a consultative committee through a Presidential decree in September 2011 meant to find possible measures for increasing women’s political participation. Nonetheless, the proposed legal quota for women was rejected in 2020.

Despite the rejection of the legal quota, some voluntary measures promoting women’s political participation took place. Political parties released a communique committing to one-third of their nominees being women. Furthermore, in the 2021 elections, one female candidate was endorsed by her clansmen, becoming the first woman in Somaliland to be fully backed by clan elders. Such an endorsement suggests that clans’ views on women in leadership are changing, encouraging future women aspirants.

Somaliland’s 2021 parliamentary election attracted 246 candidates from 3 parties. Thirteen women vied for the seats, but none was elected. It contrasts the 2005 election, which saw two women elected to parliament. This level of female exclusion from politics is unprecedented, but it is not a new problem. A multitude of factors, including a lack of support from electoral bodies, voters and their parties, lower financial resources, and patriarchal pressures from their clans, have contributed to the low participation or election of women. 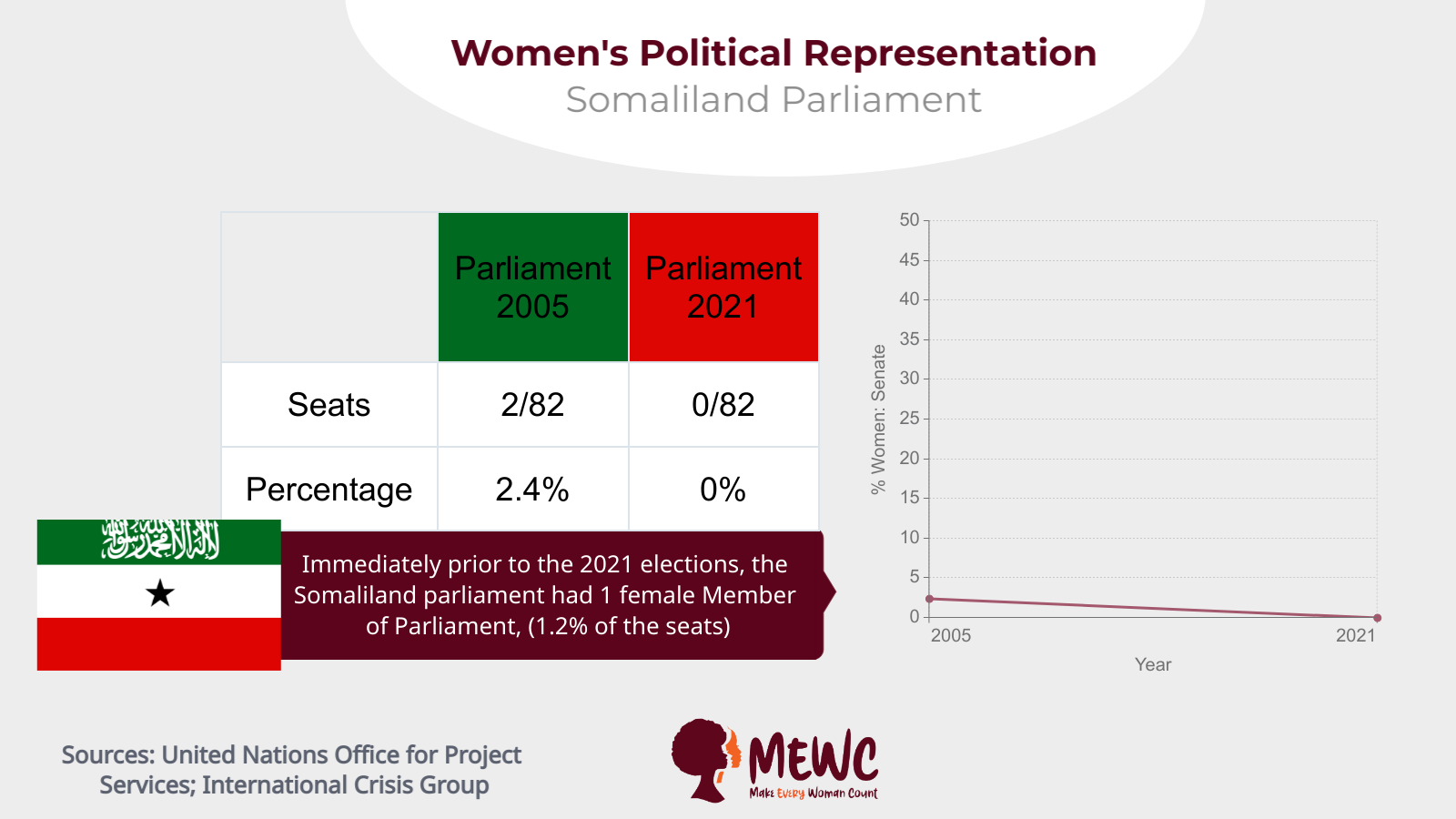