Kenya held its general elections on 9th August 2022, with both presidential and parliamentary elections being conducted. The presidential election had four contenders: Deputy President William Ruto, veteran opposition leader and former Prime Minister Raila Odinga, George Wajackoyah and David Mwaure.  The election campaigns and voting exercises were generally peaceful and calm. However, female candidates experienced violence despite promises from the government to tackle the problem. Electoral staff experienced harassment and physical assault, as well as arbitrary arrest, and one electoral officer was abducted and tortured to death in the line of duty.

Some 65% of the 22.12 million registered voters turned up to cast their ballots. This lowest voter turnout in 15 years was blamed on a lack of voter education, youth unemployment, lower interest by the youth and reduced trust and confidence in the political system. Dr William Ruto of the United Democratic Alliance, a party within the Kenya Kwanza coalition, was declared the winner by the Independent Electoral and Boundaries Commission (IEBC) after garnering 50.49% of the votes, narrowly defeating Mr Odinga. However, the Azimio la Umoja-One Kenya coalition presidential candidate, Mr Odinga, rejected the official results and filed a presidential election petition at the Supreme Court, citing electoral irregularities. Nonetheless, all the Supreme Court judges unanimously upheld Dr Ruto’s win, and he was duly sworn in as the 5th President of Kenya.

Despite being a stable country, Kenya’s hotly contested election cycles have threatened to destabilise it more than once. Although the 1992 and 1997 elections saw some death and displacement, the violence following the December 2007 election represented a lasting scar on the country’s history of recurring post-election violence. Ethnic violence organised by armed militia, most of whom developed from the 1990s ethnic clashes, resulted in the death of over 1000 people and displaced of some 350,000 people from their homes. The 2017 elections also had their share of disruption and violence, albeit not at the levels witnessed in 2007-2008. In comparison to the previous elections, therefore, the 2022 general election was lauded by international observers as largely peaceful and “above average”, as cases of clashes between police and protesters were not reported.

Kenya has a multi-party political system based on parliamentary democracy. The 2010 Constitution introduced a bicameral parliamentary system consisting of the National Assembly and the Senate. The National Assembly comprises 349 members, 290 of whom are elected and 12 of whom are nominated. The Senate has a total of 67 members and a speaker. The promulgation of the 2010 Constitution provided a critical milestone in promoting women’s political participation by setting aside 47 seats for women. It helped guarantee women’s participation in lawmaking. Article 27(8) of the constitution also established a ground-breaking gender quota requiring that no more than two-thirds of elective public bodies be of the same gender.

The general elections of 2022 set a new record in the number of women elected into various seats. As opposed to 2017, where three women won gubernatorial seats, 2022 saw seven women elected. Moreover, the number of female members of parliament also increased from 76 (21.71%) in 2017 to 81 (23.14%) in 2022. It is the highest level of women’s representation in Kenya’s National Assembly history. In the Senate, 21 female senators (30.88%) were elected, keeping the number of female senators the same as following the 2017 election.

The increased participation of women in politics has come in the wake of the growing public awareness of the importance of female participation. These developments have, in turn, contributed to a political necessity among parties to encourage more women to vie for seats to maintain relevance, especially among women voters, as they comprise close to half of the registered voters. 3 of the 4 presidential candidates picked women as running mates to get more support from female voters. The selection of Martha Karua, a former justice minister and once a presidential candidate, as Mr Odinga's running mate, symbolised a new dawn for Kenyan women. It made her the first woman to run on a major political party's presidential ticket. It also gave Kenya the best chance to date to have the first female Deputy President. In her acceptance speech shortly after being picked as the running mate, Martha Karua stated, "This is the moment to usher more of us into the National and county leadership." During the campaigning period, she promised to tackle corruption in the country. She also addressed the sexist nickname, 'Iron Lady, ' which some have used to refer to her: "Strong leadership in women is seen as an exception and not the norm because I haven't heard of an 'Iron Man", she commented.

Susan Kihika, who was among the 7 women elected as governor, commended voters “for being progressive and electing three women” to the top leadership positions of Nakuru County.

Despite being short of the constitutional threshold, Kenya has made strides toward promoting women's rights and gender equality. The enactment of laws prohibiting FGM, child marriage, and GBV in Kenya has promoted women's and girls' welfare. Sexual harassment, for example, in the workplace is also prohibited under the law providing women with increased security. In contrast, laws requiring a gender-equal share of inheritance have extended their economic empowerment.

Although Kenya has proven to be more accommodating to women’s participation in politics over time, the constitutional two-thirds gender quota is yet to be met. Despite numerous attempts, the government has still not adopted legislation to fully implement this constitutional requirement more than 10 years after the inauguration of the 2010 constitution. The controversy surrounding the adoption of legislation guaranteeing the two-thirds gender quota has created political deadlock several times, often pitting the judiciary against the legislative arm of the government. In 2017, for instance, Kenya’s Supreme Court gave the National Assembly 60 days to pass a law guaranteeing at least one-third of the country’s elected representatives will be female or face dissolution. In 2020, Chief Justice David Maraga advised President Uhuru Kenyatta to dissolve the parliament over its inability to pass the two-thirds gender rule and parliament’s gross violation of the Constitution.

Unlike previous election cycles, Kenya’s 2022 presidential and parliamentary elections took place peacefully in a calm and serene environment. Dr William Ruto was declared the winner after garnering 50.49% of the votes. Although none of the presidential candidates was a woman, this election stood out as 3 out of the 4 candidates chose women as running mates. Martha Karua of Azimio la Umoja-One Kenya coalition stood a good chance of becoming Kenya’s first female deputy president after being selected as Mr Odinga’s running mate.

The election set a new record in the number of women elected. 7 women were elected governors in 2022, up from 3 in 2017. The number of women members of parliament also rose as well as senators, despite the failure of parliament to pass a law to fully implement the constitutional two-thirds gender rule and the judiciary’s calls for action. Nonetheless, given the positive public reception of women’s political participation, the 2022 elections are a testament that with the right laws, policies and affirmative action, women can thrive in whatever they set out to achieve. More, however, needs to be done to meet the two-thirds constitutional threshold in all public elective seats beginning with the adoption of legislation guaranteeing women’s equal representation. 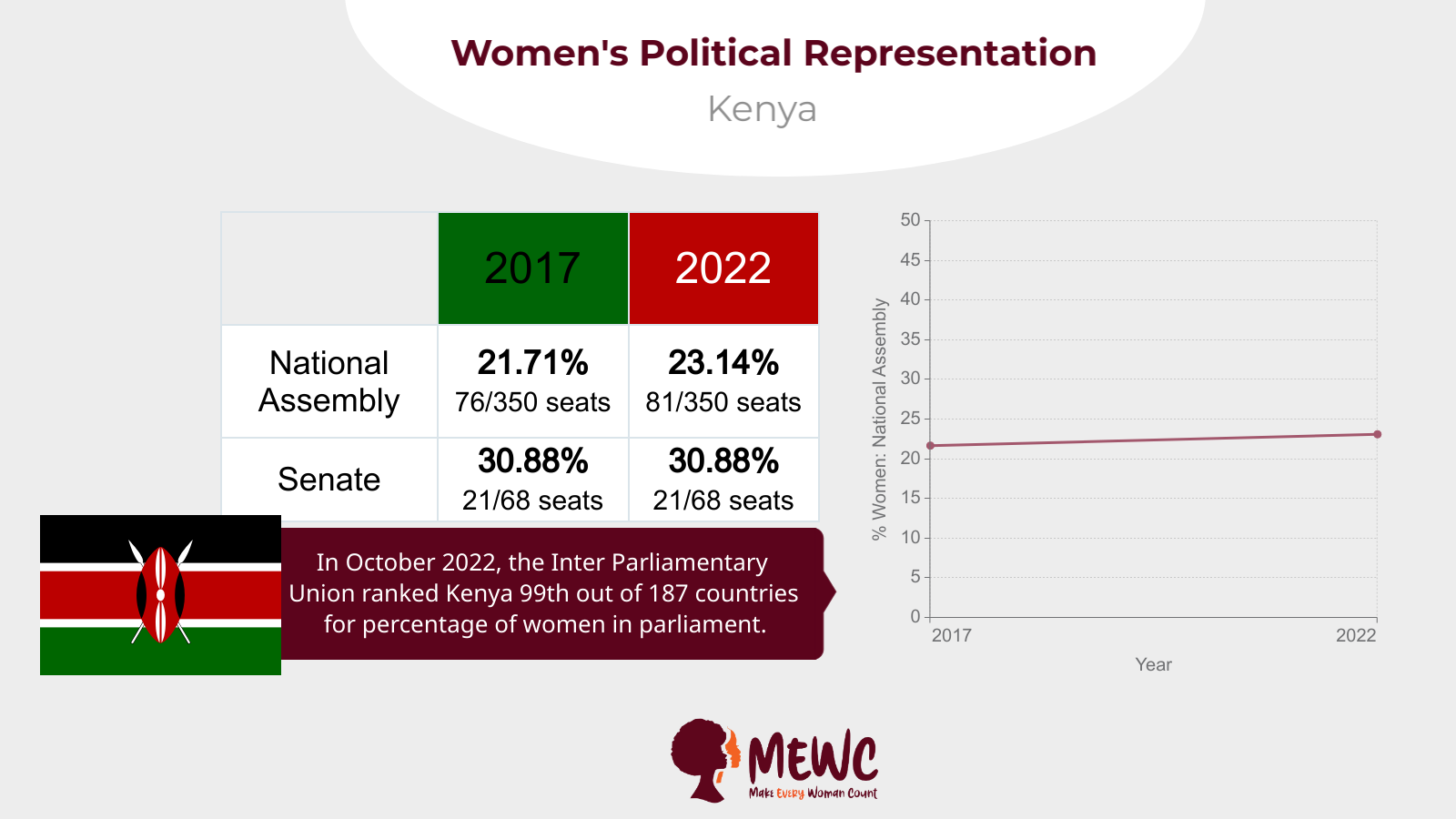