The parliamentary elections for the Republic of the Congo took place in July 2022. The elections met several challenges, including a low voter turnout. Indeed, some opposition parties boycotted the elections, considering that these elections were “organised in total disrespect of the law” to the benefit of the former ruling party. Among other irregularities, some names of candidates on the final candidate list were omitted from the ballot papers. Petitioners appealed to the Constitutional Court based on irregularities and fraud, requesting the annulment of the published results. However, on August 14, 2022, the Court validated the election results.

Over time, the Republic of the Congo has experienced political instability. Elections have seen violence, and many have been contested. The 2017 legislative elections were boycotted by many opposition parties claiming that the vote would be rigged. President Denis Sassou Nguesso has held office nearly uninterrupted for over 40 years. In 2015 a constitutional referendum removed restrictions allowing President Nguesso to run again. During the 2016 Presidential elections, one of the nine candidates was a woman, Claudine Munari.

The Republic of the Congo has a presidential-parliamentary political system, with a bicameral Parliament composed of a National Assembly with 151 directly elected members and a Senate with 72 members indirectly elected by local councils who were themselves first directly elected by the people. Article 17 of the Congolese Constitution guarantees parity and assures the promotion and representativeness of women in all political, elective and administrative functions. Article 61 of the Electoral Law n°40 of 2014 requires political parties or political groups for legislative or senatorial elections to take “into account the representation of women at a rate of 30% of nominations.” The Law also sets the quota for the representation of women in local elections at 30%.

Among the 25 women elected in this year’s legislative elections was Mabondzot Munari Claudine, who got elected with 49.42% of the vote. She was Minister of Trade and Supply between 2009 and 2015 and, in 2016, was the only female presidential candidate. In addition, Mouangassa Line Gaëtane Princesse, currently Attachée of Financial Services at the Ministry of Finance, was elected with 26.63% of the vote.

The Republic of the Congo has strengthened women’s rights through legislation and is a party to international women’s rights instruments such as the Maputo Protocol. According to the IIAG 2021 interim report, Congo is among the countries with the most significant improvement in political representation, socioeconomic opportunities and equal access to public services for women, with an increase of 10.1 points between 2010 and 2019.

Congo Republic adopted the Mouebara Law on combating violence against women in 2022. Article 9 of the Mouebara Law disavows ‘political violence’, i.e. ‘any act or practice, based on discrimination between the sexes, aimed at depriving women of the exercise of any political, partisan or associative activity or any fundamental right of freedom, or at preventing them from doing so.’ Article 11 of the same law states that ‘any distinction, exclusion or restriction which has the effect or purpose of impairing the recognition of the fundamental rights and freedoms of women, on the basis of full and effective equality, in the civil, political, economic, social and cultural field [...] constitutes a discrimination against women.’

At the same time, the Republic of the Congo has seen a deterioration in equal civil liberties for women, and many remain dependent on traditions and customs that discriminate against them. They are often victims of various forms of violence. While women’s political representation has increased in recent years, no legal sanctions are in place in case the quotas are disregarded. For Maleye Diop, UNDP representative in the Republic of the Congo, the reason why there are few women in the country’s political bodies is that when drawing up lists of candidates for elections, political parties tend to prefer men and do not represent women equally. For example, in this year’s local elections, women represented 19% of the candidates overall and 13% of the candidates for the legislative elections.

On June 11, 2022, in Brazzaville, the Ministry in charge of women’s issues, in collaboration with the UNDP, organised a training session to enhance women’s leadership. More than 1,700 women candidates in the 2022 elections received training in the habits and customs of national political elections. During the training session, organisers highlighted the need to include women in political life and decision-making processes to ensure the "democratic development [and] good governance" of the country.

Despite several challenges and petitioners appealing to the Constitutional Court to get the published results annulled based on fraud and irregularities, the Republic of the Congo completed its parliamentary elections in July 2022. The results saw an increase in seats held by women in the National Assembly between 2017 and 2022. Women now represent 16.56% of the seats in the National Assembly, or an increase of 5.3% from 2017. Notably, Mabondzot Munari Claudine, the only woman to participate in the 2016 presidential elections and former Minister of Trade and Supply, won her seat with 49.42% of the vote. Also, the current Attachée of Financial Services at the Ministry of Finance was elected with 26.63% of the vote.

Although the Republic of the Congo has a quota, it has yet to have the desired impact. When the quota does not clearly improve women’s political representation, the system is not ‘watertight’; there is a need to enforce the quotas’ legislation, for example, through sanctions, at least temporarily. Indeed, the objective is for women to be represented in political and decision-making contexts and to be represented effectively. In other words, women must be allowed to participate and be heard and listened to once elected. 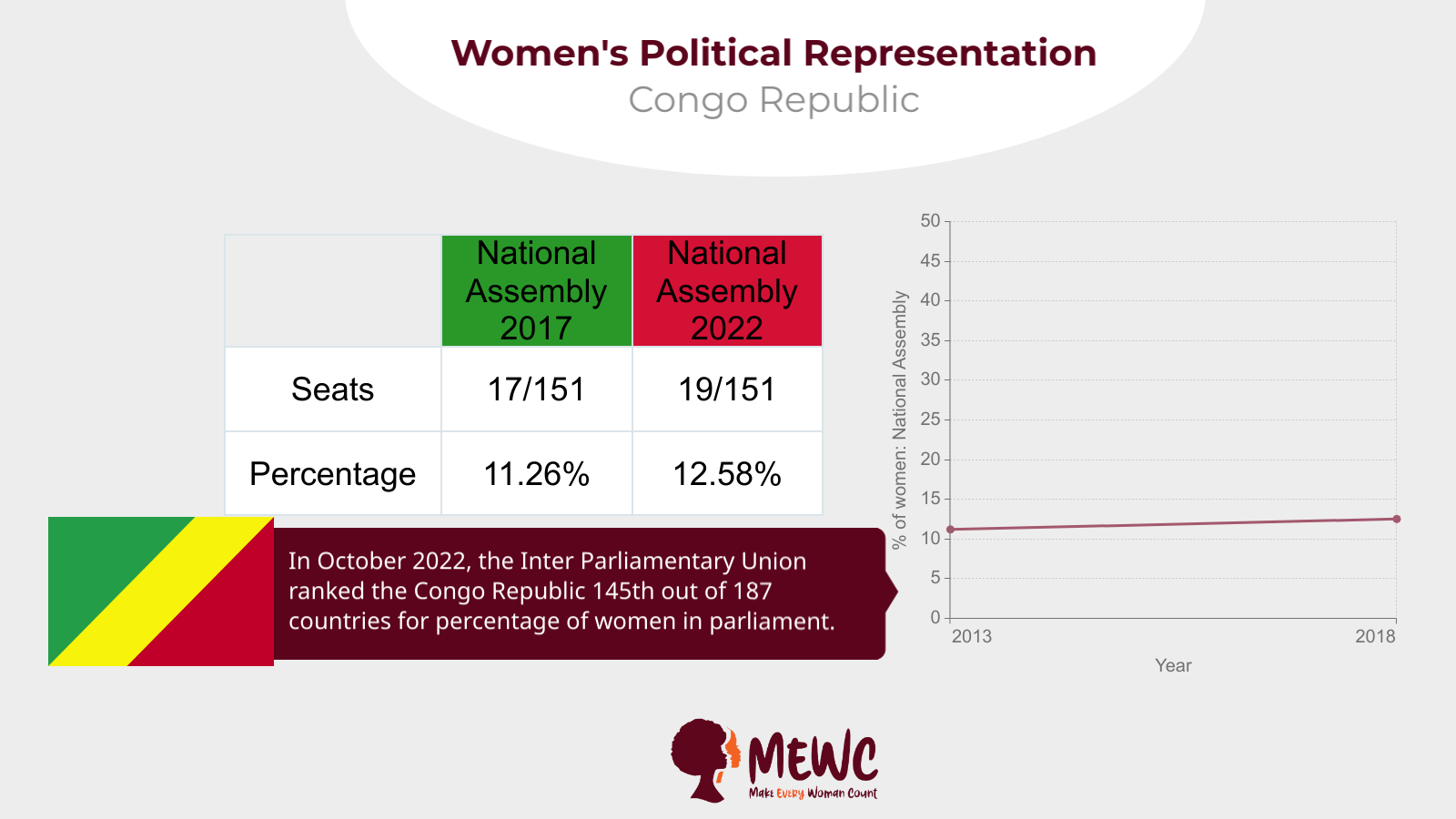